An unexpected scaly visitor showed up in the home of a Thurgoona resident earlier this week.

Eric Holland, a man from New South Wales, was doing a repair job in his shed when he spotted a five feet-long lizard climbing the wall of his home.

Despite the fear the giant creature posed, Holland managed to snap a photo of the lizard before it left his property. 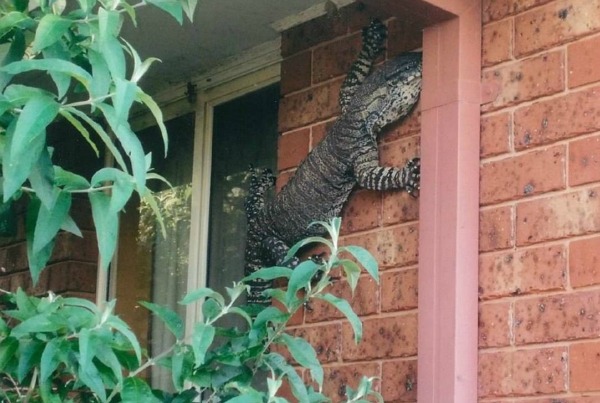 These giant lizard which can grow to about 8 feet in length are known as lace monitor lizards or Varanus varius. Regarded as great climbers with great speed and agility, these creatures are not known for attacking humans. However, they may mistake standing humans for trees.

A triple-tailed lizard was found in the Metohija region of Kosovo this year.

The blue-throated keeled lizard also known as Algyroides nigropunctatus had tails measuring 10, 15, and 30 millimeters in length.

According to one of its discoverers, Daniel Jablonski, a biologist at Comenius University in Slovakia, it is the first specimen known in its species to have three tails.

“I have been studying reptiles for a long time and examined hundreds or maybe thousands of specimens, but this was my very first,” Jablonski said.

Based on previous studies, multi-tailed lizards have extra tails because their original tail is only partially cut off and remains attached.  Still, extra appendages can form even after the entire tail is severed as observed with the Kosovo specimen.