Snakes have long fascinated people of the Internet. Recently, a photo of a snake which  managed to check in inside an Aeromexico flight took social media by storm, while a video of dozens of snakes attempting to eat a baby iguana went viral. It seems that netizens can’t get enough of snakes these days.

When villagers spotted an enormous African rock python, which they suspected to have swallowed a calf due to its huge belly, they decided to kill it to see what’s inside its stomach. But instead of finding a small animal in its belly, the villagers discovered dozens of slimy pink colored eggs in its stomach. 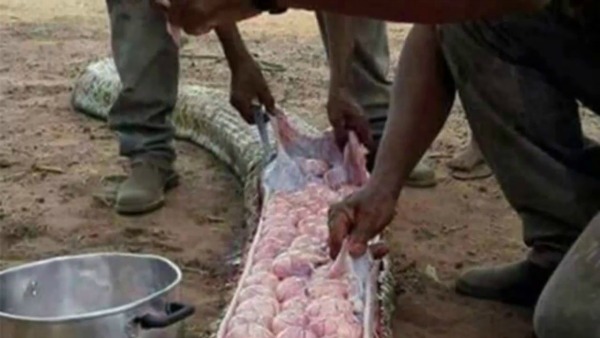 “Locals in Nigeria killed a huge snake after suspecting it of having eaten a calf because of its swollen stomach discovered it was pregnant with dozens of eggs.”

Contrary to their suspicions, the giant reptile didn’t swallow an animal but was actually pregnant with 50 snakes.

The locals, instead of throwing the eggs away, decided to harvest it as it is a rare delicacy in the area.

Photos of the killed pregnant python quickly spread like wildfire on social media. While many criticized the villagers for killing the nonvenomous reptile, others approved the locals’ actions as it prevented the birth of other dangerous snakes.

What is an African rock python?

Considered as the largest snake in Africa and the sixth largest in the world, the African rock python can grow more than 20 feet and lives in Sub-Sahara. While it is non-venomous, these reptiles kill preys up to the size of antelopes and crocodiles by constriction. It usually feeds on monitor lizards, fruit bats, monkeys, large rodents, warthogs, antelopes and crocodiles in forest areas, and on poultry, rats, dogs and goats in suburban areas. They rarely kill humans.