Two years before the tragic crash of EgyptAir flight MS804 into the Mediterranean sea, one of the flight attendants onboard the doomed aircraft posted a disturbing image of a plane crash on her Facebook page.

Samar Ezz Eldin, who is feared dead along with 65 other people on the airbus A320 aircraft traveling from paris to Cairo, posted an image showing a female flight attendant walking from the sea with her luggage. A downed airplane with its nose in the water is seen at the background. 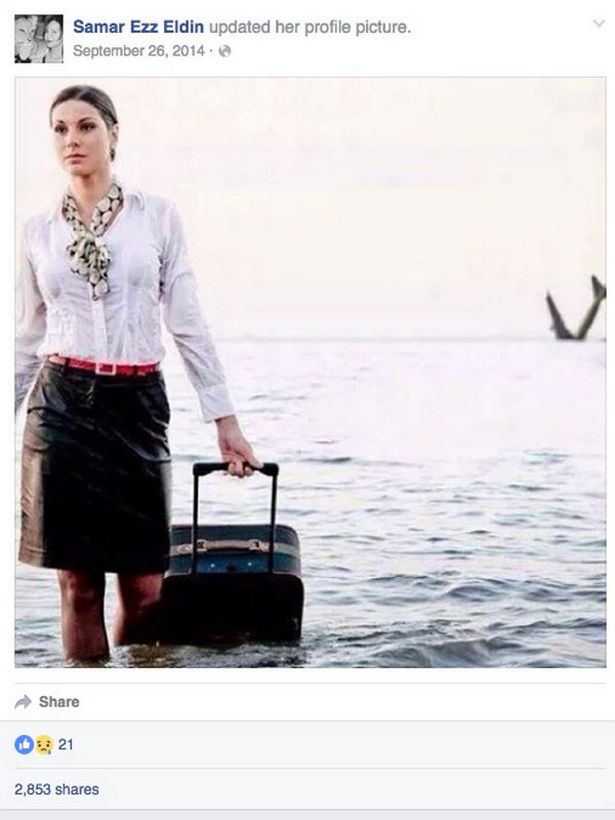 The bizarre photo was posted on her Facebook page in September 2014, two months after EgyptAir flight MH17 was shot down in Ukraine.

Most aviation experts believe that a terror attack was behind the crash of the passenger jet on Thursday, May 19.

The plane was reported missing on Thursday morning after taking off from Charles de Gaulle Airport at 11.09pm (local time) on Wednesday, May 18. The aircraft was around three-and-a-half hours into journey and was just 10 miles away into Egyptian airspace when it suddenly dropped from the radar screens and disappeared.

According to Greek authorities, the plane fell 22,000 feet and “swerved sharply” in Egyptian airspace.  There was no distress call prior to the jet’s disappearance.

Though the cause of the plane crash remains a mystery,  aviation analysts think that the sharp movement could be an indication of a struggle inside the cockpit.

“It wasn’t ­necessarily a device on board. It would suggest the pilot has been involved in some sort of an ­incident in the cockpit,” said aviation analyst Paul Charles.

“But it sounds like there could have been a device, placed on the plane earlier at another airport in some kind of Lockerbie ­situation. It may have been placed on board at Paris, though security is very tight there,” he said.