Why so? Well, did you know lions can open a car door? I did not know that either but a viral video circulating on the web shows proof of how these majestic creatures have truly evolved into intelligent creatures who figured out how to open this modern contraption. 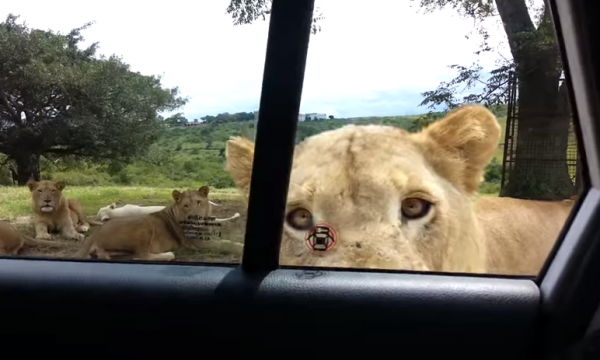 Of course, that is just an exaggeration as the video shows only one lion doing the deed but who knows? The others could soon learn how to do it…

Anyway, the daughters of a missionary couple in in South Africa learned the hard way that it is always safe to lock your car doors, especially if you are surrounded by a pride of lions.

Lions and the Zoo

Lions are among the key animals found in zoos across the world; though some of the subspecies are on their way to extinction or are already declared as endangered. Some zoos are already participating in breeding programs for these endangered species.

The plight of lions in zoos are often far better than those of the ones in the circus but many animal rights activists are pushing for zoo owners to release all types of animals in the wild.

There are several lion subspecies, with the African lion being the most recognizable of all; though the term “African lion” is actually the common name used for several subspecies of lions from Africa.

Lion hybrids exist in the wild and even in some zoos; though the practice of interbreeding is highly discouraged to preserve existing subspecies and because the hybrids could sometimes have poor characteristics.

For example, according to the Wikipedia, male ligers [produced from a male lion and a female tiger] are sterile; though their female counterparts are often fertile.