Mere days after a 75-year-old woman bound for Los Angeles, California was detained for supposedly carrying a live .38 caliber bullet in her handbag, news of another old woman nabbed at the Ninoy Aquino International Airport (NAIA) in the Philippines has outraged netizens.

This time an 85-year-old woman bound for Canada has become the latest victim of the “tanim bala” (bullet planting) scheme at the airport. Crisencia Pabustan’s luggage was locked but when it was passed through the airport’s x-ray machine, OTS security screening officer Bryan Rivera informed her of the bullet inside the trolley bag.

Pabustan’s 62-year-old daughter, Pricilla Pabustan Velasco, was outraged at this, screaming to the security officers that she had personally packed her mother’s bag and was positive that there was no bullet inside when she sealed the luggage.

Pabustan’s son, Anthony Pabustan, was also outraged that their mother was victimized by the scheme. He angrily mused that there must be some kind of “magic” in the airport for the bullet to appear inside the locked bag even if they did not place anything there. 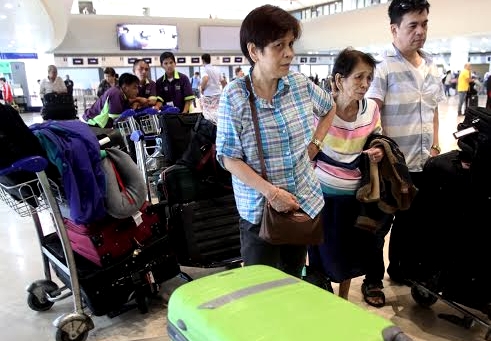 Because the NAIA supposedly had a “hands off” policy regarding such cases, Office of Transportation Security (OTS) team leader Buenvenido Ross told Velasco to retrieve the bullet from her mother’s bag for verification.

According to InterAksyon, the OTS called for representatives from the Public Attorney’s Office (PAO), the Philippine National Police (PNP), and the airline (Eva Air) to inspect the bullet.

The bullet was revealed as merely an amulet by Police Inspector Rey Dooc. He said, “The cal .45 bullet was without gunpowder and the bullet head had been replaced, so there was no liability because it was not a live bullet and not considered as ammunition.”

The police, then, confiscated the amulet and let Pabustan go.

“We wanted to help the old woman because, at her age, she will never put a bullet in her own luggage, but her daughter threw a tantrum as she even threatened to publicize the story in the Canadian newspapers,” Ross revealed.

Will this “tanim bala” scheme never end? Well, here’s one netizen’s clever idea to ward off the tanim bala gang:

LOOK: Netizen Comes Up With A Witty Solution for Tanim-Bala Scheme