MANILA, Philippines- Actress and host Kris Aquino has decided to end her silence regarding her controversial use of the presidential chopper.

( I was beaten in social media. They said the Aquino family is abusive and thick-skinned for using the presidential chopper for campaign). 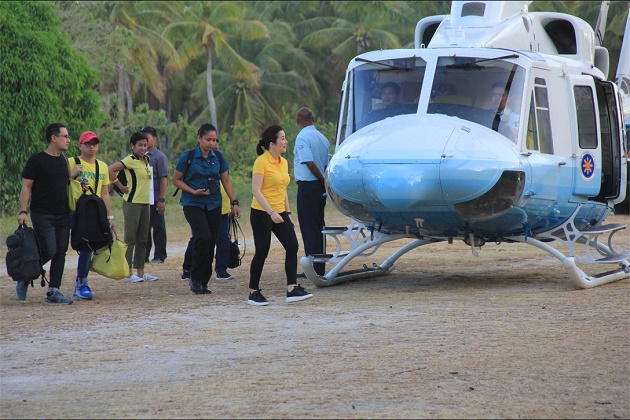 The 41-year-old actress also urged people to defend her against those who accused the Aquino family of being abusive.

Kris came under fire after a photo of her alighting a helicopter while on her way to a Liberal Party sortie made rounds on social media on Wednesday, April 20.

Several angered social media users have alleged President Aquino and the Liberal Party of misusing public funds by letting Kris, who is actively campaigning for the party’s standard bearers Roxas-Robredo tandem, use the government vehicle.

A certain netizen commented: “Look at how these people use the government’s money and vehicles to campaign for Mar Roxas.”

The controversial photo is believed to be originally posted on the Facebook page of the Municipality of Dalaguete.

But for Communications Secretary Herminio Coloma Jr., there was nothing wrong or irregular with Kris’s use of the presidential vehicle.

Kris, the youngest member of the Aquino family, can ride official government vehicles with the President.

“Members of the President’s immediate family are allowed to ride with him in official government vehicles,” Coloma told reporters in a text message.

Meanwhile, President Aquino defended his younger sister saying that she is among the country’s top taxpayers. He also revealed that he is only sharing his success with her.

“Whether it is an individual taxpayer or someone who is very close to me who shared all of the burdens, I think it is just proper to share the successes. Share kami sa hirap, share kami sa successes,” Aquino said.