MANILA, Philippines- Presidential sister Kris Aquino has shared data from the Bureau of Internal Revenue proving that she has been one of the Philippines’ top taxpayers since 2008 days after she was criticized for using the presidential chopper in campaigning for Liberal Party in Dalaguete, Cebu last April 19.

Using hashtags “truth” and “honest taxpayer”, Aquino showed her annual income tax since 2008 and indicated her rank through an Instagram post. In 2011, Aquino emerged as the country’s top taxpayer after paying P49,871,657. 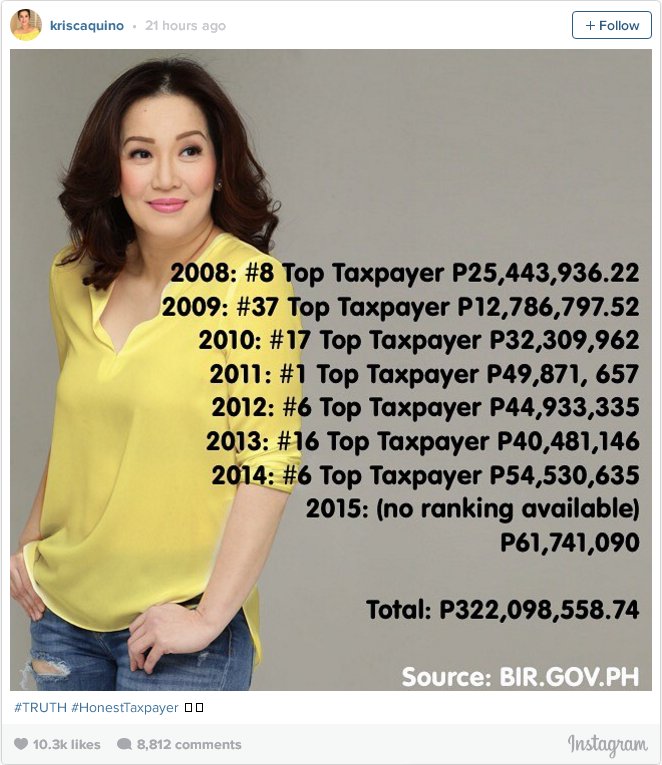 Last week, Aquino earned the ire of netizens after photos of her beside a helicopter with the presidential seal spread like wildfire on social media and drew negative reactions. Netizens have alleged the Aquino family of misusing government funds to endorse Liberal party standard bearer Mar Roxas.

Aquino’s post appears to echo President Aquino’s statement  when he defended her against critics.

After revealing her tax payments, Aquino once again came under fire for sharing the information on social media. Several netizens stressed that the celebrity should stop bragging about her tax since it is paid by percentage and not by amount.

A certain karlothegreat commented: “FYI Ms. Aquino, we pay it by the percentage not by amount. The higher the wage, the higher the tax. My tax is as important as yours. Your tax is important as hers. Tax is not a payment, it’s a contribution. In essence, no tax is small or big. So please stop bragging about this number.”

The 41-year-old TV-host actress and endorser recently took a break from showbiz to focus in living a quiet life with her family.