News anchor Korina Sanchez has gotten herself in trouble again after a remark she made regarding Typhoon Ruby last week actually went viral across social media and local/international news sites.

While the credits for TV Patrol were rolling, she and fellow news anchors Ted Failon and Noli de Castro were discussing Typhoon Ruby which, at the time, had not yet made landfall and is forecasted to possibly skirt the country, heading off to Japan instead.

In half jest, perhaps, Korina said she wished the typhoon would choose to spare the Philippines and go to Japan – because the country is prepared for it, anyway. Although that might be true, the remark was uncalled for.

Yes, even if Japan might be more prepared than the Philippines in handling natural disasters such as typhoons, it angered netizens to hear Korina say that live on national TV. No matter how prepared Japan might be, no one, absolutely no one has the right to wish ill will on others!

She could have wished for the typhoon to simply go away or dissolve, instead of asking for it to go to Japan!

Even top media personalities were angered by the remark. Here’s a post from Joey de Leon: 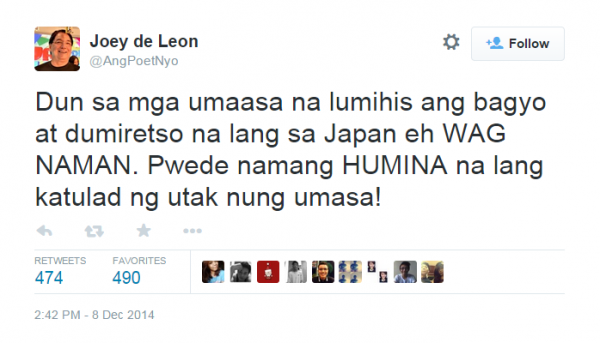 Although Joey did not name names in the post, it was clear that he was talking about Korina – something that netizens quickly realized as well.

Days after Korina’s major faux pas, a hoax article from So What’s News began making rounds on social media – that of Korina supposedly declared by Japan as ‘persona non grata’.

“I am very saddened to hear reports of schadenfreude coming from a TV anchor, who just last year, was put in her place by Mr. Anderson Cooper of CNN,” said [Japanese Prime Minister Shinzo] Abe. “That is why without a second thought, I am declaring wholeheartedly Ms. Korina Sanchez of the Philippines, as an unwelcome person anywhere in Japan.” 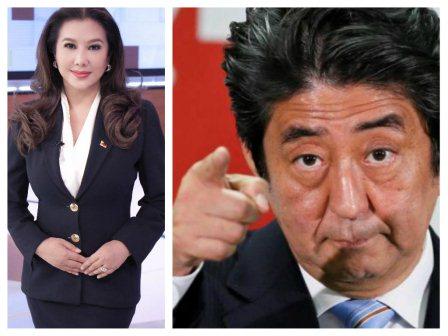 What’s so funny about the whole thing is that many people actually believed the article was real news, remarking how Japan was able to slap the newscaster with something big for what she has done.

There were, of course, many who soon realized that the ‘news’ was satirical but remarked that Korina deserves to be declared a persona non grata for real, because of what she did.

Read the entire satirical news on So What’s News.

So, the question is, do you think Korina deserves to be declared a persona non grata by Japan?