A kind driver has gone viral, earning praise from netizens after stopping the bus to fix a crying kid’s bike. There were passengers on the bus, but this driver stopped for a short while to make sure that the kid was alright. Isn’t that so beautiful?

These days, it can be so difficult to find help from other people because everyone seems to skeptic about others and their motives, thinking that they could be scammers. With so many people having fallen to scams, it is not really hard to see why many people feel this way.

Many simply don’t mind that others might need help because they are too busy with their own job or simply minding their own business.

But a kind driver in Ottawa, Canada recently went viral for doing a kind deed to a kid, despite the fact that he had passengers on his bus at the time.

Someone shared a photo of the driver of a OCtranspo bus on route 18 to St. Laurent. The kind driver stopped the bus to run across the street so he can help a little kid with his bike. It only lasted for 30 seconds yet the kind deed was etched in the memories of so many people forever. 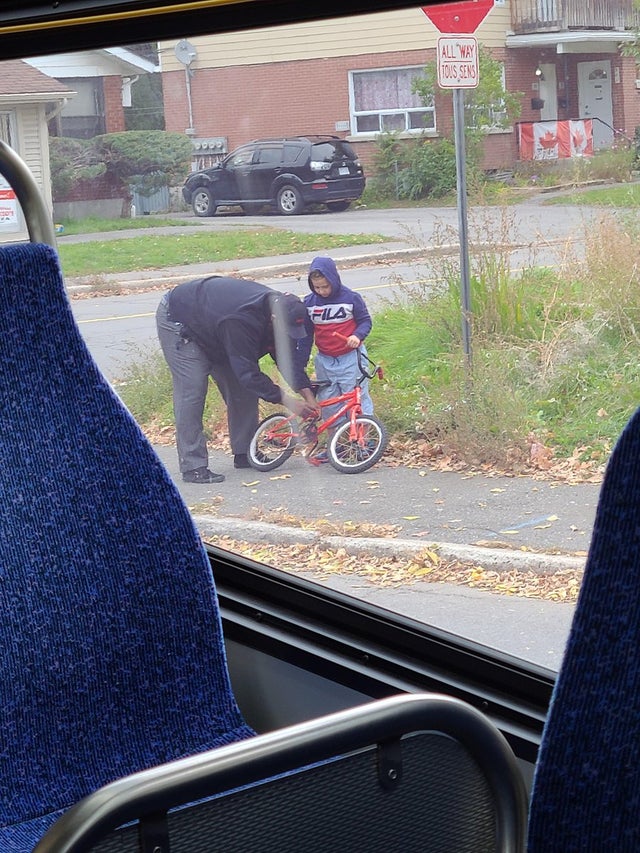 After receiving a lot of backlash from some netizens who thought that the driver inconvenienced his passenger with the unscheduled stop, netizen Riot284 who originally posted the photo explained that the kind driver could have actually saved the kid’s life.

“The bus was about to make a right turn when the kid was crossing the street on his bike slowly, visibly crying with no parents nearby. As the driver was turning, he asked out the window if he was okay, so he got out of the bus to make sure he wasn’t hurt or something bad had happened,” Riot284 explained.

“All it turned out to be was the chain on the bike appeared to have fallen off, so he hooked it back on for him and got back on the bus.”

How to Fix a Slipped Bike Chain

It is easy to fix a slipped bike chain. For mountain bikes and others with gear, you have to first shift to the lowest gear. For fixed-gear bikes, simply proceed to the next step.

Next, lift the bike a bit or use the stand to lift the rear wheel off the ground. You can also put the bike in upside down position, but this can damage the seat and handlebars. Using your fingers, try to return the chain to the teeth and turn the pedal with your hand.

Repeat these steps until the chain is back on.