Home
Videos
Funny Videos
Kid Insists the Onion He’s Holding is an Apple, Refuses to Cry after Biting the ‘Fruit’

A stubborn but rather adorable kid recently went viral after insisting that the large onion he was holding was an apple; then, he refused to cry and accept defeat even after he was proven wrong.

Amused mom Gesa Croonen of Lütjensee, Germany shared a video of her son. Although the caption was in German, it was readily translated into English by Facebook – and the video quickly went viral. 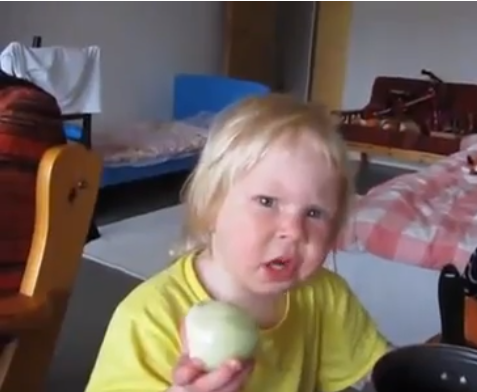 According to the translation, the conversation between the mother and son went this way:

Boy: Mom, can I eat this apple?

Mom: Okay if you insist, eat it.

(Rather dead than admitting the mistake)

Most kids would listen to their mother and believe what she’s saying but this kid stood his ground, thinking he was correct this time and his mom was wrong.

Mom most likely just told him to eat the onion, thinking he would realize his folly and admit he made a mistake but the kid took the dare and bit on the onion.

With one bite, it was obvious that he realized he was wrong because his faced scrunched up from the taste and his eyes began to tear up from the onion’s effect. But he had refused to cry. He wanted to prove his mom wrong – this was an apple! 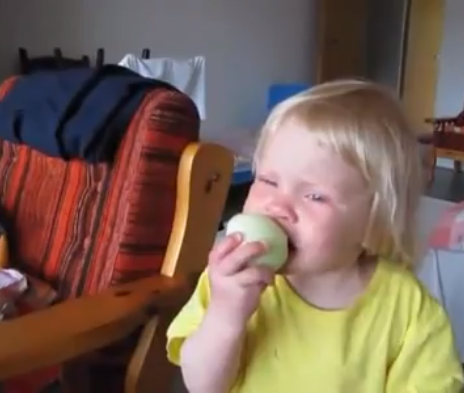 So, he continued eating. His face continued to turn even worse as the taste overpowered his senses but this kid was a real trooper. He still didn’t accept defeat and bit into the fruit again!

At this point, the video was cut off. The mom had obviously pitied the kid and made him stop eating. But this kid learned a very important lesson that day – it’s alright to admit that you’re wrong instead of punishing yourself into doing something just you thought it was right…

What can you say about this kid?