Days after an incident involving a Jollibee delivery boy and a customer identified as Jay Bee took the Internet by storm, the fast food company has finally broken its silence.

Reports claimed that Jay Bee tricked a Jollibee deliver boy by intentionally delaying his delivery just to get a P200-gift certificate from the fast food giant. As the story went viral on social media, Jay Bee drew ire online.

Based on Jollibee’s investigation, the delivery boy, who didn’t want to be named, arrived at the reception area of Jay Bee’s condominium at exactly 12:50 am. His time of arrival was well within the 20 minute delivery guarantee since the order transaction was finalized at 12:31 am.

Adeva revealed that the delivery boy “waited at the lobby as the building receptionist was calling the customer to inform him of the delivery.”

In it’s official statement, Jollibee said: “We also want to remind our customers that Jollibee’s delivery guarantee time ends upon the arrival of the rider at the lobby of the building, hospital, or condominium or gate/guardhouse of subdivision or offices.”

It was also discovered that the delivery boy had no choice but to give in to Jay Bee’s demand to  debit the equivalent amount of the gift certificate to his total bill.

Although it was against the company’s standard policy, the delivery boy opted to follow Jay Bee’s order “as (he) did not want to create a scene and to avoid prolonging the argument with the customer”.

Many netizens expressed their anger over Jay Bee’s act as they assumed that the poor delivery boy will shoulder the charge incurred from the “late delivery”.

However, Adeva stressed that the branch did not charge the gift certificate from the delivery boy’s salary. 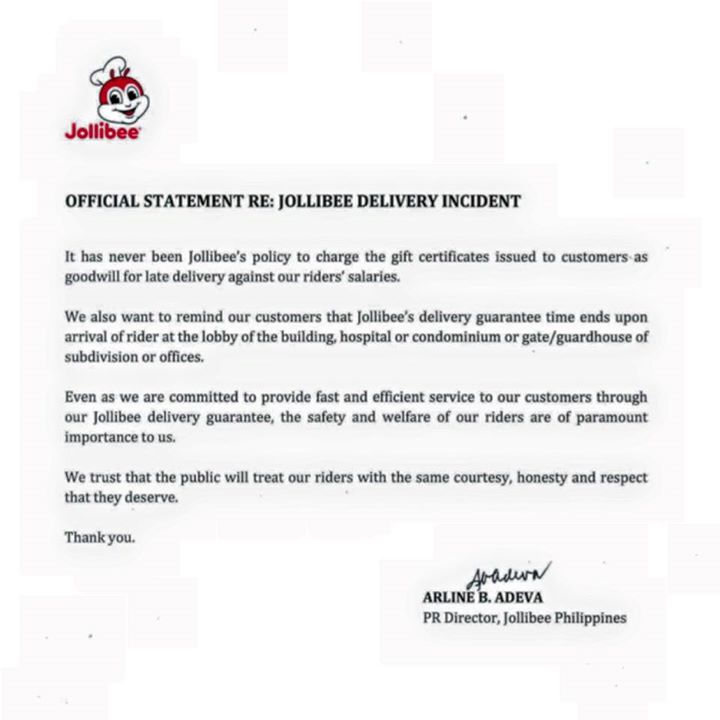 Reports also revealed that Jay Bee is embroiled in other controversies such as scamming and cheating.