Plenty of infrastructures, especially walkways and overpasses, across the Philippines lack proper upkeep and maintenance, making these look more like eyesores instead of providing better facilities for the people to use. Some of these structures have even become shelter or comfort rooms for the homeless!

Such is also the state of many of the overpasses in Baguio City, the summer capital of the Philippines. But the ones in Baguio City have found new life in the hands of an unlikely person: a Japanese national who paints these infrastructures for free!

According to The Cordilleran Sun, Mazakasu Nose was photographed by Facebook user Querubin XD while he was voluntarily painting an overpass in the city, possibly the one connecting the City Public Market and Baguio Center Mall. In the post, the blog also identified Mazakasu as the Japanese national who could often be seen picking up trash and helping clean the city at a regular basis, even if he is not paid to do so. 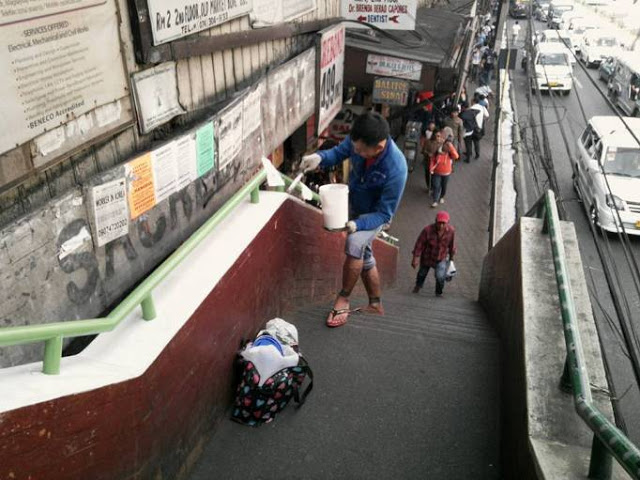 Mazakasu has been a long-time resident of the city, selling Japanese delicacies in a small stall called Masaya Takoyaki at the third floor of Baguio Center Mall. The Cordilleran Sun revealed that Mazakasu is often seen handing out flyers at one of the mall’s escalators, possibly the one closest to his stall.

Overpass in the Philippines

While there are a lot of pedestrian overpass in the Philippines to allow people to safely cross busy streets, many have fallen in a state of disrepair due to neglect by the authorities and abuse by the people.

Most of these structures are littered with various trash or even smell of urine. In many overpasses across the big cities, you can also see vendors or even homeless people blocking parts of the structure.