Home
News
News & Culture
Italian Man, A Beggar in the Streets of Manila?

In a status posted on Facebook, Mitch Enriquez shared a puzzling story of an Italian who claims to have been begging in the streets of Manila for 3 ½ years already.

According to the man, who said his name was Maximo, he arrived in the country some 4 years ago, accompanied by friends. These friends, however, had already passed away so he was left all alone in the Philippines.

It was not clear why the 58-year-old Maximo decided to stay in the country nor why he was begging in the streets instead of living in beautiful houses like most foreigners living in the Philippines are doing. Mitch was not able to extract more details about his personal life, so it was not sure whether he had any family in the country or even back in Italy. 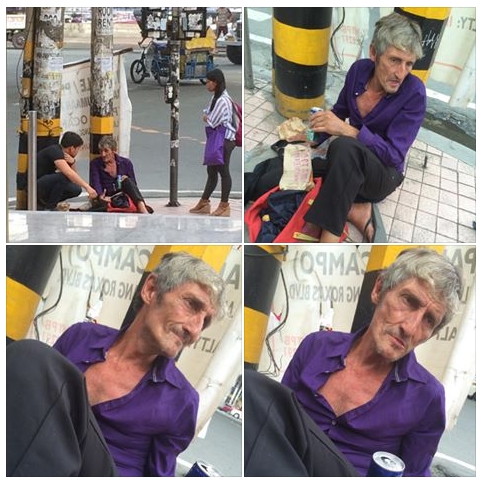 When asked where he is staying in Manila, his reply was “nowhere”, indicating that he might have been homeless and sleeping in the streets all those years he has been begging in the metropolis.

Mitch said they found him last week at Torre Lorenzo corner Taft Avenue. It was puzzling that he did not go to the Italian embassy – as was also pointed out by many of those who commented to the Facebook post.

The post has since gone viral, gaining close to 34,400 shares, as of writing. Mitch said they want to help him go back to his country, so he could have a better life there perhaps. Many suggested that they bring him to the embassy instead.

Technically, he is already ‘overstaying’ and hasn’t renewed his documents; thus, he would surely be paying a huge amount before he would be allowed to go home – unless someone intervenes so he could back without paying the fines. After all, as a beggar for all those years, he probably hasn’t earned enough to pay those fees.