Clearly drunk and looking for trouble, a man was caught on CCTV trying to kick a dog. What he gets was instant karma, instead.

In the footage, the dog can be seen wagging its tail in a friendly manner as the man was approaching. However, the drunk did not like the dog and thought it would be a good laugh to hit the defenseless animal.

When he was standing just a step away from the dog, the man swung his leg to kick the dog as hard as he could. The clever animal saw what was coming and quickly dodged the kick. The man lost his balance and fell flat on his face while the dog looked on, a safe distance away.

We can surely say this is instant karma! The next time you are drunk and looking for trouble, better kick yourself first instead of kicking a defenseless animal else you become a viral hit on YouTube for your utter stupidity.

“Dogs are man’s bestfriends” – as cliché as this might sound, it is also the truth. However, not all people enjoy having pets or like seeing them, as can be seen by the man in the video above.

Animal cruelty is rampant across the world, whether in third world or first world countries. In the past, dog meat is considered a delicacy in many parts of the Philippines; though the practice of eating dogs has lessened after laws were made against animal cruelty. Still, there are still reports of people eating dogs in hinter barangays or places where they are confident the authorities could not catch them red-handed.

Most of the cases of animal cruelty involve beating up the animals or neglecting them so that they appear very thin, dirty, and sick. In many cases involving dogs, the animals can become aggressive as a result of the cruel acts experienced. 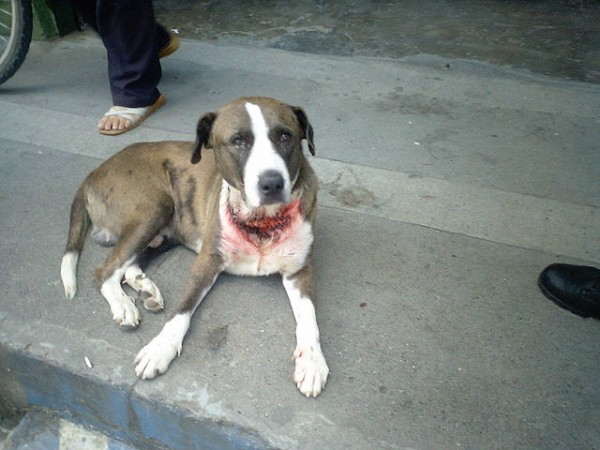 Animal cruelty is, sadly, not just limited to dogs but also to other species, whether domestic, farm, or even zoo animals.

For many of these animals, justice is never served because their abusive owners simply abandon them or even have them killed just so they won’t be a bother anymore. For some, the owners are caught by authorities; these people are made to pay for their crimes but this often means just paying a fine and not getting some jail time. Others exact revenge on their abusive owners by biting or kicking them.

As for some, like this clever dog in the video, they get instant karma.