Home
Lifestyle
Inspiring Photo: The Child Studying at the Sidewalk

Many of us take our lives for granted even as we live in the comfort and security of our own homes but there are people out there who seem content, coping with whatever is at hand, even without having a lot of money.

Take this photo of a child studying at what appears to be a sidewalk, for example. According to netizen Joyce Torrefranca who took the photo and shared it on Facebook, she was inspired by this kid. She did not provide additional details about where the photo was taken but this, too, has inspired us nonetheless. 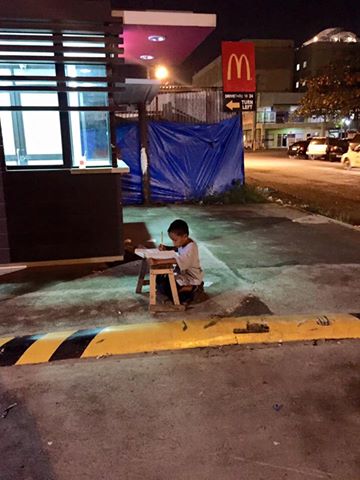 Another netizen, Giomen Probert Ladra Alayon, commented on Joyce’s photo, saying he had spoken to the kid after the photo was taken. The child was making his homework in English. Giomen sums up the encounter with something that we certainly agree with:

This kid’s perseverance in studying makes this picture such an inspiration. Despite the lack of personal space or inadequate lighting, still he chose to study.

Keep it up kid! Mabuhay!

Let this kid be an inspiration to us to make the most of what life has given us – even if it means studying under the street lights because they probably had none at home. We hope he will continue with his studies and become a successful person someday.

Success has many definitions, including “the accomplishment of an aim or purpose” and “the attainment of popularity or profit”, according to Google. For many, success is synonymous to being popular and well-known as well as having lots of money yet there are many who may not be famous or rich but are happy with their lives. For these people, success is not about money and popularity but about being happy and content with life.

Of course, such definition of success is not shared by all – and lengthy debates could ensue between these two different groups of people.

Still, if we look back at the first definition, “the accomplishment of an aim or purpose” it would seem that both groups are right all along – they just have different aims.