German ‘beggar’ Benjamin Holst who was kicked out of Thailand for “duping the entire nation” was spotted partying in Bali, Indonesia! In his own Facebook post, Holst shared photos of him with some ladies while partying in Crusoe’s Island Bar located in Kuta. Holst shared that he was just partying with some “lady friends” at the bar.

According to Coconuts Bali, the photos were posted before Holst took to the streets of Tabanan to beg for some ‘crowdfunding’, as is his modus operandi in the many places he’d gone to.

It was back in 2014 when he first made it to international news for duping people in Bangkok, Thailand. Suffering from a congenital condition called macrodystrophia lipomatosa which gave him a perpetually swollen left leg, Holst used this to his advantage. 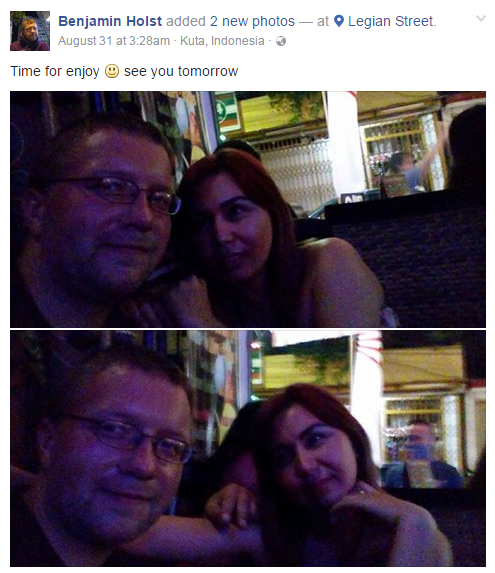 People readily took pity on the unfortunate foreigner who was sick and asking for help in a faraway land. So, many readily parted with their money and a lot of people personally helped him get assistance from the German embassy – and they also donated money for his fare back home. But he skipped the flight!

Pocketing thousands from the locals and some charity organizations, Holst used the money to party in Pattaya, a place roughly known for being the ‘sex capital of the world’. He was later deported from Thailand but was later spotted in Denmark and also in the Philippines, as previously reported on RachFeed back in 2015!

The ‘partying beggar’ is now enjoying his time in Indonesia, milking money from unsuspecting Good Samaritans by day and spending their cash on bar girls at night.

Macrodystrophia lipomatosa is a congenital condition that causes gigantism of fingers or toes; though it can also affect legs and arms, as exemplified by Holst. The condition can affect both the upper and lower extremeties.