An Indonesian man could not believe that he got scammed by a phone buyer who paid in fake hand-drawn money! The scammer did not even attempt to use fake money that looks close to the real thing! Tsk. Tsk.

These days, it is already possible to buy items online with cash on delivery (COD) payment options. This helps the seller sell more stuff to people who prefer the convenience of simply paying for the item they buy when the package arrives. 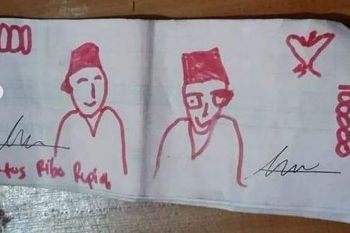 Yet this is not always the best way to sell or buy stuff. An Indonesian guy recently experienced this firsthand after a buyer duped him using fake money that does not even look like the real thing as other scammers might have done.

While other scammers would have used counterfeit money that looks like the real thing, this one actually got away with the scam using money that looked like it was drawn by a toddler. Tsk. Tsk.

Everyone knows this is fake money at first glance! So, how did the Indonesian seller got duped?

The seller, whose name was withheld for privacy reasons, went to the police station in the city of Samarinda in Kalimantan, Indonesia, to lodge a report against the buyer. He explained that he had only met the man over the internet. 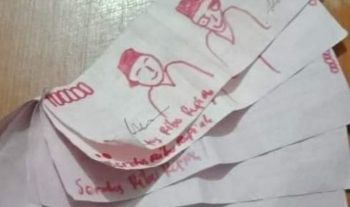 They exchanged phone numbers and scheduled a meetup at around midnight on December 16. The seller innocently agreed to the weird condition, thinking the buyer was too busy to meetup at another time.

At the meeting place, the buyer arrives in a motorcycle but kept the engine running. The seller handed him the box containing the cellphone and the buyer handed back what he thought was the money, Rp900,000 ($63.50).

The seller did not even bother to check the money – and the buyer hurriedly zoomed off. It was only after the buyer was some distance away that he realized the money was fake! But the seller could not locate the guy anymore; the number he used could no longer be reached, too. 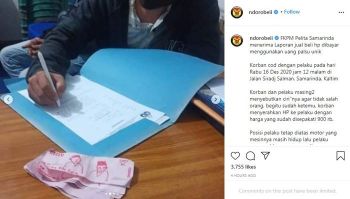 Dismayed over the scam, the seller could not do anything but report the matter to the cops. Netizens think this is the most hilarious fake money anyone has ever used to scam someone. Ouch.

Because there are so many counterfeiters out there who know how to make money that look like the real thing, governments around the world make sure to incorporated various security features on their currency. Portrait watermark, 3D security ribbon, microprinting, and color-shifting ink are among the most commonly used security features.