Outliving all of his 10 siblings, four wives and children, Mbah Gotho is an Indonesian who claims to be born on December 31, 1870. If his birth documentation recognized by Indonesian officials is proven true, then he is the world’s oldest man at 145 years old.

In 1992, the super senior citizen from Sragen, Central Java had his gravestone made in preparation for his death. But 24 years later, Gotho finds himself still awaiting his passing. In his interview with Liputan 6, the old folk revealed that he is ready to die. 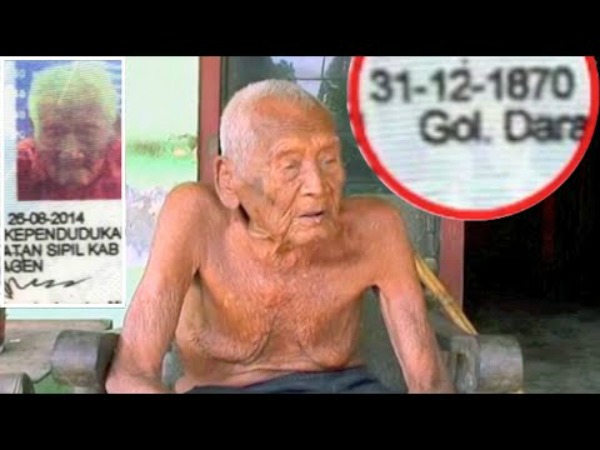 “What I want is to die. My grandchildren are all independent,” Gotho said.

According to his grandchildren, Gotho, who now has a poor eyesight, mostly listen to the radio these days. He has had to be spoon-fed and bathed for the past three months as the old man has become increasingly frail.

The title of the world’s oldest person belongs to a French woman named Jeanne Calment who died at the age of 122. If Gotho’s age is verified, then that would make him significantly older than Calment.

However, his record needs to be independently verified so Gotho remains among those whose records remain unverified such as James Olofintyi, 171, from Nigeria and Dhaqabo Ebba, 163, from Ethiopia.

In case you’re wondering what is Gotho’s secret to longevity, he said patience plays a big role in living a long life.

Eating Two Raw Eggs a Day Is the Secret to Longevity

Now the world’s oldest living person at 116, Emma Morano claims that consuming three eggs a day, two of them raw, is her secret to longevity.

Morano also revealed that eating small quantities of minced meat and consuming only milk for dinner  also prolonged her life. Moreover, she said leaving her violent husband in 1938 and staying single for the rest of her life contributed to her longevity.