In a post on Facebook, Jesrael Nginhayan asked help from netizens, promising a reward to anyone who can tell him the whereabouts of a woman named Maria Ellena Villa Estrada.

According to Nginhayan, Igorot investors in Cordillera trusted the woman who allegedly promised them that she could help double their money but they lost their investments totaling P150 million after she went away and never coming back again.

The Dailypedia reported that after getting in touch with Nginhayan, they learned that Estrada allegedly promised the victims they could earn a lot of money from Emgoldex, a networking company supposedly involved in gold trading. Allegedly, she also promised the investors could double their money by investing money through a Forex trader she knows.

The investors would later learn, Nginhayan told The Dailypedia, that Estrada did not invest their money in Forex but ran away with it. 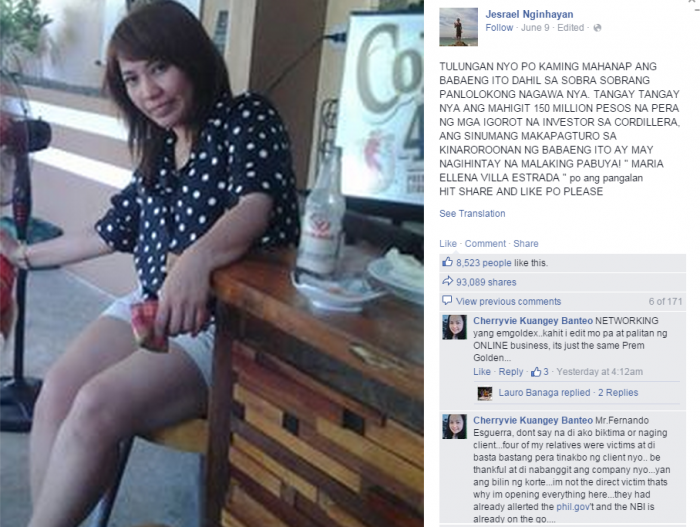 Many of those who commented on Nginhayan’s post were angry at Estrada but there were also those who blamed the investors for wanting to earn a lot of money by investing in an individual they barely knew. Nginhayan defended the investors, however, saying they were allegedly tricked by Estrada’s words and that the woman had pretended to be religious just to lure the victims coming from Buguias, Trinidad, and Ifugao, The DailyPedia further reported.

These days, networking businesses are often viewed as synonymous to pyramiding that it is difficult to distinguish the differences between these two. Moreover, the two are so closely tied with a lot of scams that the public has been repeatedly warned by the government not to invest their money in these rather dubious businesses lest they lose their money.

In networking and pyramiding, much like what happened to the Igorots, the recruiter promises prospective investors a huge return for their investment using various business models.

Some of these companies offer retail products but others simply make the money move across the ranks. The latter is quite dangerous, of course, as using leverage this way to gain a larger portion size can lead to magnified losses (though it also leads to magnified gains, especially in those in the higher tiers), lectures InvestoPedia.