How far would you go to look like someone else? Well, for identical twins Anna and Lucy DeCinque, it really was not that difficult considering they looked quite similar from the start. However, they wanted to take it one more step closer by choosing plastic surgery so they can really look very identical.

For the twins, everything has to be the same. They do things at the same time, eat the same food, wear the same clothes, and share the same boyfriend!

So, hmmm, how is the sleeping arrangement? Well, you will be surprised that these women do not have qualms about sharing a bed with the same guy. After all, they do want to do things the same way. Their boyfriend Ben Byrne is a fitness buff and needs twice the energy to keep up with these active girls. 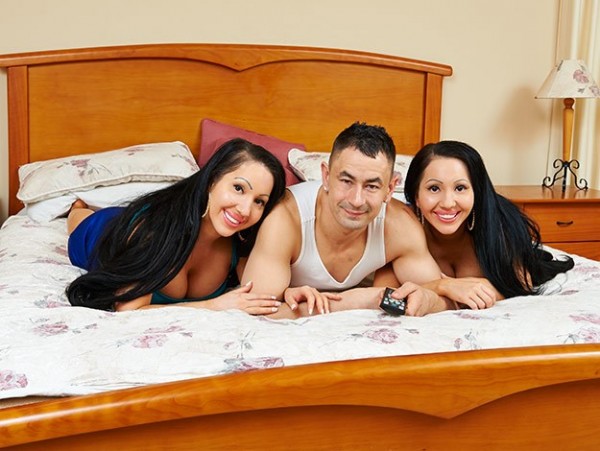 Ben said he had trouble at first, especially because he had to make sure the two got the same amount of attention. As the months passed, he learned how to balance his time and attention between his two girlfriends.

He even got their mother’s stamp of approval. In fact, during a fight with the girls [which, by the way, is always 2 against 1], the mother actually stepped in and sided with him.

Aside from sharing the same bed with the same boyfriend, the two also share the same Facebook account [where they met Ben], the same car, and the same job.

Can you guess their job? Probably fashion or something related to modeling and designing? Well, you are definitely wrong. These ladies are not brat dolls in person. They actually work in a hospice, taking care of old people. They discovered their passion for caring for old people when they had to personally take care of their dad who later died of cancer.

Identical twins are two people who came from the same zygote or fertilized egg. This zygote had split into two, making their gene make-up very much alike. For this reason, most identical twins share very similar interests, likes and dislikes, and thought processes – aside from looking the same, of course.

However, cases such as those exhibited by Anna and Lucy are very rare.