Tacloban City, Leyte in the Philippines is still reeling from the devastating effects of Typhoon Yolanda/Haiyan but on July 2, 2016, residents were in for a scare after a huge ‘tornado’ appeared in the sky. Who wouldn’t be afraid after seeing such a massive thing, anyway?

In a video posted on social media, this huge weather formation could be seen forming in the distance in what appears to be an airport in the foreground (there were several boarding ramps and luggage carts seen). The video location was later confirmed to be an airport: Daniel Z. Romualdez airport in the city. 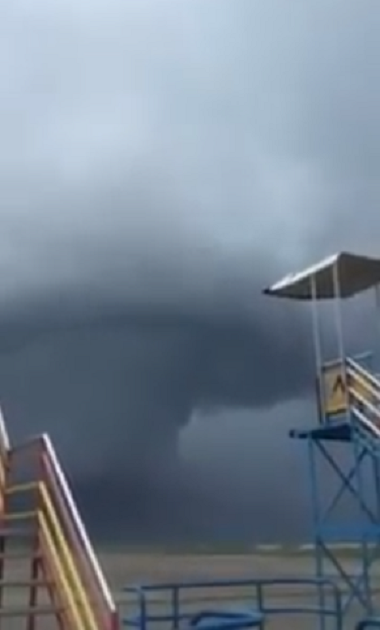 The original video was posted by Yna Chavez Cuayzon who shared her fears that the huge ‘tornado’ would bring another devastation in the city. The clip was also later reshared on YouTube by Disaster News.

People watching this form in the distance were videotaping the whole thing but there were many who expressed fear over what they were seeing – and some even started praying and asking God to spare them of the tragedy.

Thankfully, there were no further news of this tornado making landfall and destroying Tacloban City – just quite possibly, this probably wasn’t a massive tornado but a huge storm cloud, even possibly a supercell cloud.

Check out this video and see this scary weather disturbance for yourself:

Supercell clouds could be easily misidentified as huge, wedge tornados because they are also rotating; this is the reason why supercells are also called as ‘rotating thunderstorms’. These clouds are often isolated from the other clouds in the thunderstorms.

But we should not dismiss supercell clouds as harmless because these do lead to more serious weather conditions like dangerous cloud-to-ground lightning, deadly tornadoes, heavy rain and flooding, and even hail.