Is this proof that angels exist? At a hospital, the family of Chelsea Banton has already placed her life in God’s hand; they asked the doctors to pull the plug to end her years of suffering. She has multiple developmental disabilities and has been in and out of the hospital for countless times.

Her mother, Colleen, was praying fervently by her side. Two hours after they pulled the plug, she was still alive.

A nurse at the station happened to glance at the CCTV monitor at this time, noticing a man standing in front of the pediatric ICU doors, not moving. Thinking it was odd for a man to be standing there, she went out to check on him but was surprised to see no one there. 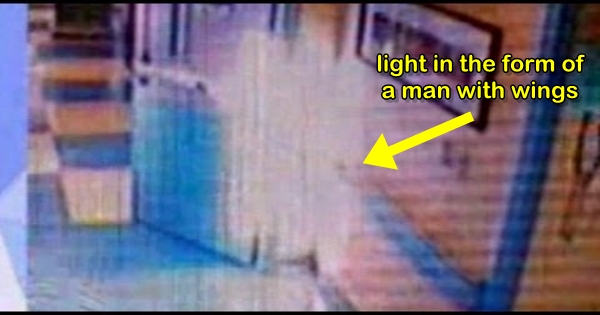 Going back to the station, she saw him again on the monitor. A co-worker verified her observations. So amazed they were that they called other hospital staff, who arrived and experienced the same thing.

Believing they are witnessing something divine, they called Colleen over. Just like them, she never saw the man at the door yet could easily see him on the CCTV monitor. They all tried to document the unusual event, taking pictures using their cameras or mobile phones yet no one could seem to take the man’s photo – not from the CCTV monitor, not from the hallway.

Perhaps a proof that the miracle was for her and Chelsea, when Colleen took the picture using her phone, an image finally appeared. Those who saw the picture cried because what they saw was light in the form of a man with wings.

Quickly, they went back to Chelsea who survived the ordeal and was later discharged. The family and the hospital staff believe it was the man of light who had brought the miraculous healing to the dying girl.