A viral article circulated on Facebook these past few days, claiming that the Ebola virus has arrived in the Philippines. It was claimed that at least 25 cases were confirmed in Iloilo City and 14 in Makati. The Dailypedia debunks the myth, saying the report is actually HOAX, with similar satirical articles created by people who think the Ebola virus is something they can joke about.

According to the satirical article, 4 people arrived from Liberia on a plane, but did not undergo the required quarantine to ensure they are free of Ebola. These people allegedly went out to public places, mingling with other people while enjoying their vacation.

Because of their supposed actions, more people were infected with the virus, with the Ebola count reaching 25. There were also 12 hospital staff who were allegedly forced to isolate themselves because they had been in contact with the patients who tested positive for the virus. 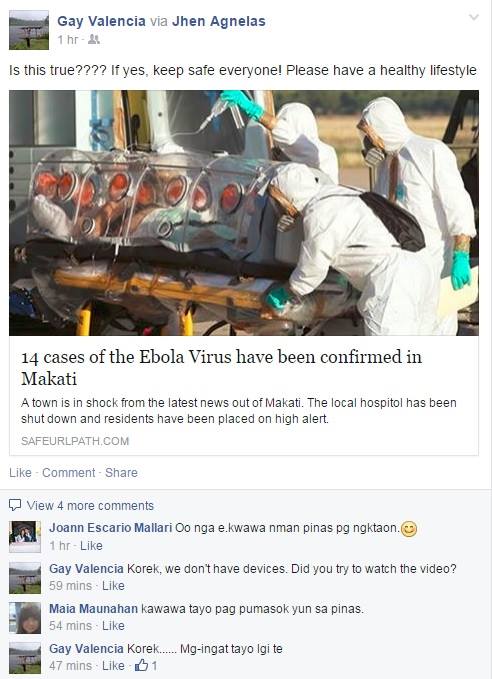 Although many people knew the ‘news’ was hoax, there were still others who thought the report was for real.

Netizens slam the satirical site for fear mongering and for joking about something that is not funny at all.

In reality, there are no confirmed cases of the Ebola virus in the Philippines.

Although our government officials are saying the country is ready to combat the disease should it arrive, we are all still hoping no Filipino will be hit by the virus, anywhere in the world. Of course, we are also hoping no one dies of the Ebola virus anymore, and that it will be eradicated as soon as possible.

RachFeed is warning netizens against easily believing in articles that seem incredulous or clicking on dubious links – these could be hoax, or worse, filled with viruses that could harm your computer or harvest your personal information.