Over 350 flights at the Ninoy Aquino International Airport (NAIA) have already been cancelled due to the Asia-Pacific Economic Cooperation (APEC) Summit on November 19, 2015 in Manila where up to 21 global leaders and a lot of international dignitaries are expected to attend. Lots of other preparations have been done – that’s for sure – but there’s this hilarious traffic sign that caught the attention of netizen kezianobliaxo: the super narrow APEC lane pointing towards the sidewalk.

The traffic sign pointed drivers to two directions: the upper part (which points to the left) of the sign is for APEC attendees while the lower part (which points to the right) is for private vehicles. This would have made sense if the sign was placed in the middle of the road but because it was set at the shoulder, it appeared to point APEC attendees towards the narrow sidewalk which was impossible for cars to pass through, of course. 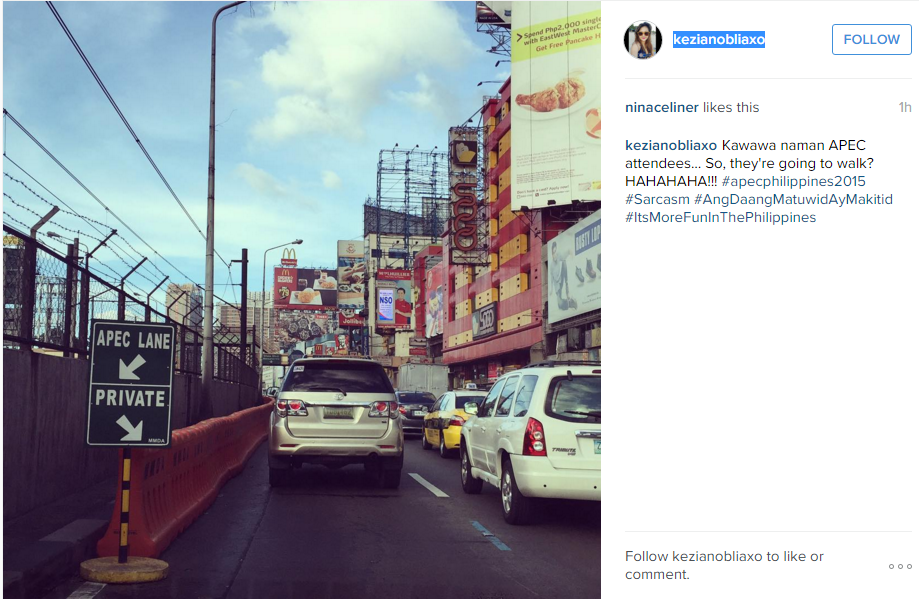 The IG post was laced with sarcasm, of course, but we couldn’t help but laugh with kezianobliaxo. With all the preparations done to ensure the summit will run smoothly, it is simply hilarious that this sign would point APEC delegates towards the sidewalk, “forcing” them to walk!

APEC Summit 2015 Hosting is Turning into a Nightmare

Aside from the 350+ domestic and international flights canceled because of Manila’s hosting of the APEC Summit, major traffic rerouting schemes will also be implemented to ensure that the delegates will reach their destinations faster. There will be VIP/express lanes which are only accessible to APEC participants – similar to the one photographed by kezianobliaxo (though that one was quite hilarious).

Moreover, the president’s initial announcement that Nov. 18 and 19 were non-working holidays was revoked. This means people still have to go to work on these days and will surely be stuck in the roads because of the traffic jams the rerouting schemes are expected to bring. This is not to mention the possible cancelations of their planned vacations (including plane tickets and hotel reservations) for these days.

During Pope Francis’ visit, cellphone networks interrupted their services to ensure that cellphones could not be used as detonation devices for explosives. With the APEC Summit expected to bring in around 21 global leaders, PhilStar’s Babe G. Romualdez speculated network signals might be affected throughout the summit’s duration.