Riding the popularity of the recently-concluded (and highly-controversial) Miss Universe pageant, firecracker manufacturers in Bocaue, Bulacan in the Philippines have created the ‘Hello Colombia’ firecracker named after the mistaken beauty contest winner.

However, the Philippine National Police (PNP) were quick to point out that Hello Colombia is included in their list of banned firecrackers.

In fact, the cops have started confiscating several of these fireworks as they inspected stalls and stores in Bocaue yesterday, December 29. 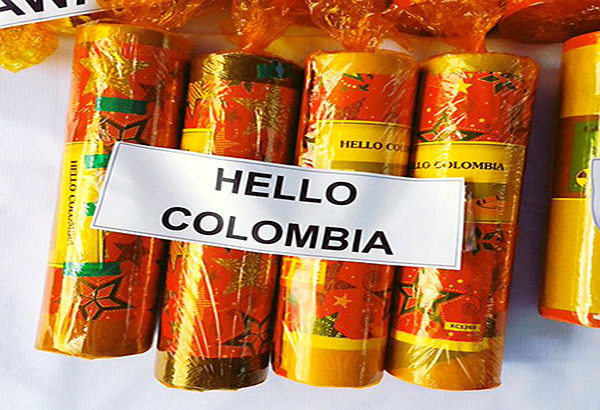 According to Republic Act 7183, firecrackers that have an explosive content of over 0.2 grams (or 1/3 teaspoon) are considered illegal. Other firecrackers seized by the authorities include big bawang, Judas belt, kwiton, lolo thunder, piccolo, pillbox, super lolo, and watusi.

The Department of Health’s Epidemiology Bureau reported that from December 21 to 29, 128 individuals have been reported to have been injured because of firecrackers and fireworks. 76 of those cases were caused by piccolo.

Firecracker Injuries In The Philippines

New Year is usually considered as the noisiest holiday in the Philippines. Besides, firecrackers are a huge part of the celebrations intended to drive away evil spirits and bad luck.

Last year, Rappler reported that 730 firework-related injuries were recorded and 65% of the victims were between 5 and 20 years old.

Supt. Kim Molitas, spokesperson for the National Capital Regional Police Office (NCRPO), has warned the public about the risks of welcoming the New Year using fireworks.

“We are reminding the public on the dangers of firecrackers. Again we ask the general public not to patronize firecrackers this New Year celebration,” said Molitas. “We are reminding our parents to please guide your children on the use of any. We also ask our retailers to help in our campaign by adhering to the rules on selling only what is allowed.”