As a sign of silent yet potent protest against the anomalies in the government as well as other causes, hackers have begun defacing Philippine government sites; this is also a prelude to the Million Mask March Event this coming November 5.

For the Million Mask March, protesters are encouraged to wear masks and join the peaceful protest to be held at the Batasang Pambansa along Batasan Road, Batasan Hills in Quezon City. According to the event poster, the protest march’s mission statement is “To remind this country what it has forgotten. That fairness, justice, and freedom are more than just words.” 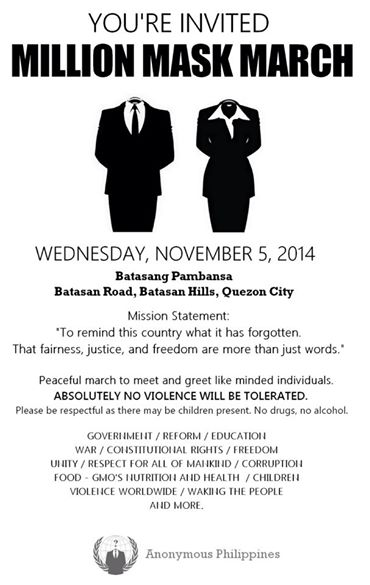 The event organizers are imploring the attendees to come in peace, warning everyone that violence will not be tolerated. This is an excellent sign that the group means well, that they really are aiming for peace.

According to Anonymous Philippines, the event will simply be a peaceful march. Nothing else. Except for the hacking prelude the group of hackers is doing on several government sites.

Yesterday, they released the following schedule on their Facebook page:

Today is November 3. If everything goes as they had planned, then several government sites are going to be defaced today. We’re posting updates later, should we get wind of which sites the group has taken down. 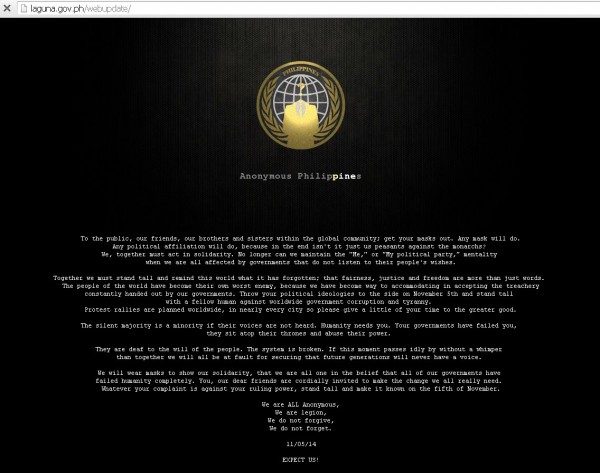 Here’s the list of Government Websites that is currently defaced by Anonymous PH;