Hacker groups have been busy these past days, creating their silent protest against the government’s alleged inaction and incompetence with handling certain issues. 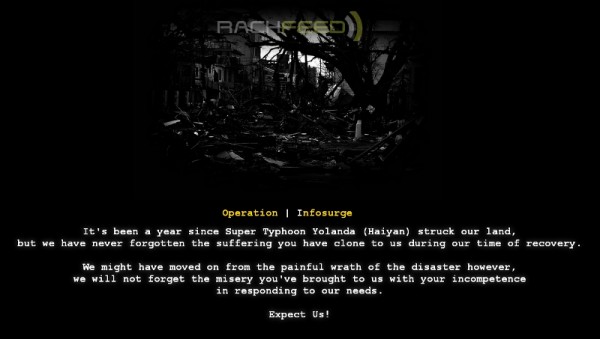 I was checking a Tesda site when it went POOF and a message appeared on the screen. It would have freaked me out, thinking my computer crashed (again!), but the black screen was replaced with a warning message. Thankfully, it was not for me (whew!).

The hackers delivered a simple yet potent message, directed to government officials.

It’s been a year since Super Typhoon Yolanda (Haiyan) struck our land, but we have never forgotten the suffering you have clone to us during our time of recovery.

We might have moved on from the painful wrath of the disaster however, we will not forget the misery you’ve brought to us with your incompetence in responding to our needs.

A tipster later informed us that it was not just the Tesda site that crashed, but several others were also defaced. hmmmm As of writing, several government sites already bore the same message from Anonymous Leyte.

The following is a partial list of the affected sites: