Have you ever experienced buying stuff online? Many of us have done this, thanks to the convenience of online shopping; but there are many who deeply regret buying something from the internet.

Netizen Mark Philip Francisco is one of these people.

Francisco bought a tent which is good for 5-6 persons from an online store. He excitedly went to the camping party without checking his purchase but when he finally set up the tent, he was much surprised to find that it was rather smaller than he expected.

In fact, instead of accommodating around 5 to 6 persons, it can only fit kids who are 5 to 6 years old! Ooooops.

He could have thrown a fit and bashed the online store on social media but Francisco decided to just make a joke out of his experience. So, he still continued camping in his tiny tent – even if it meant that only half of his body can fit in. LOL. 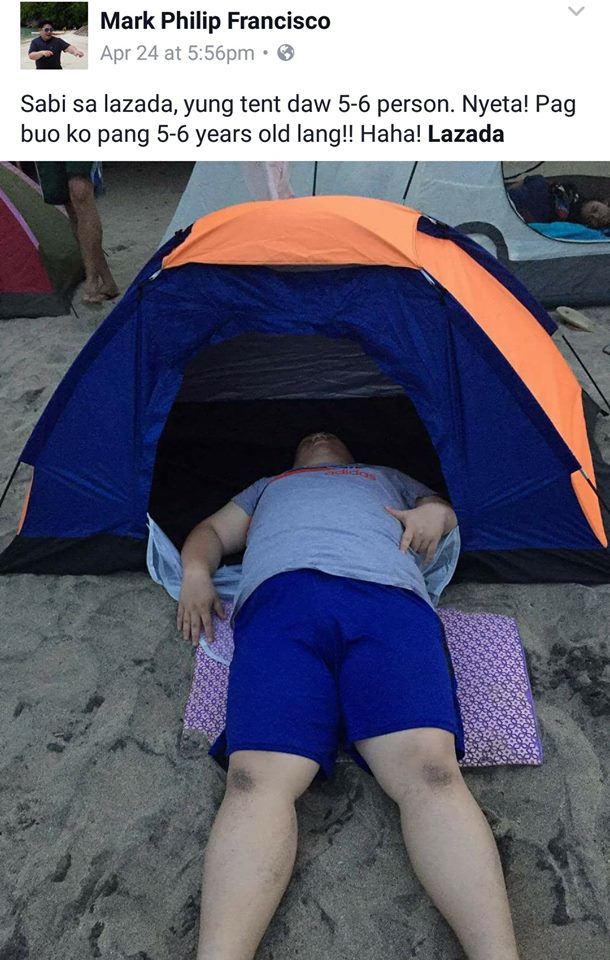 He had a photo taken in his tiny tent and shared it on social media where it quickly went viral. A lot of people had a good laugh, especially because they have experienced the same thing in the past.

We did a cursory check on the online store Francisco mentioned and found several tents that appear to be the same as the one he posted. The cheapest one costs around Php550 ($11). Could this be the same tent he bought from the store?

Well, one thing is for sure – he isn’t going to buy anything from that online store again…

An online store is one that may or may not have a physical store/warehouse to keep the goods. People who buy from an online store do so by choosing items from a website or Facebook page. Depending on the online store, payment can be done directly online via credit/debit card, bank deposit, or on a cash-on-delivery basis.