Razul Timbukong, 22, and Jarah Mendoza Labangin, 20, of Barangay Sampao in Lutayan, Sultan Kudarat (Philippines) have been long time lovers when they decided to finally tie the knot. But while they were making preparations for the big day, 24-year-old Thelma Guipal entered the scene.

Guipal would not let Timbukong marry Labangin because she claims that he promised he would marry her, not his long-time sweetheart. This caused much confusion, of course, since everyone knew Timbukong was in a relationship with Labangin but Guipal insisted the guy made the promise.

Enraged with Guipal’s revelations, Labangin’s parents initially refused to let their daughter get married to Timbukong but the groom’s parents were equally enraged, saying they had already spent a lot of money in the traditional ‘pamamanhikan’, a Filipino tradition wherein the groom and his family formally asks the bride’s hand in marriage from her family.

But because Guipal was also demanding Php120,000 ($2,570) should Timbukong back out from his supposed promise that he would marry her, all parties concerned eventually came to rather strange but not entirely unique decision that the guy marry both ladies. 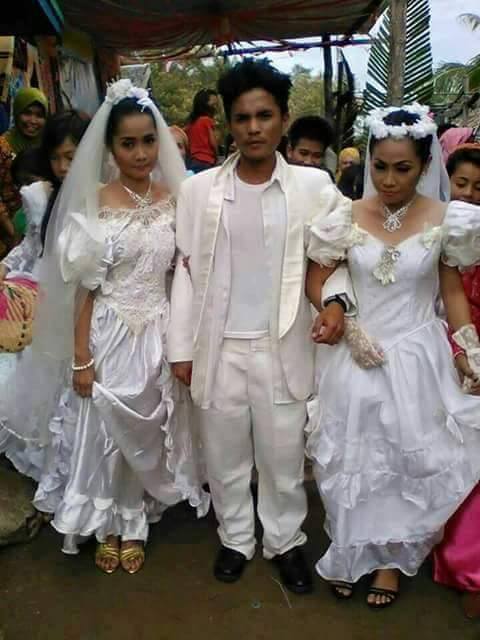 It was probably a good thing that they were reportedly Muslims because Timbukong was able to legally marry both ladies since Muslims are allowed to take more than one wife as long as they can afford it but rarely does it happen that the man weds both wives at the same time.

The wedding was held in their hometown and the three lived under the same roof for some time in relative peace. It was later revealed that one of the ladies went abroad and reportedly hasn’t returned yet.

Their rather strange story has since gone viral on social media, sparking debate that the supposed Muslim wedding is not real since they were not wearing traditional Muslim wedding garb but gowns more associated with Christian weddings.