Home
Lifestyle
Food
Gutter Oil from the Sewers Being Used in China to Cook Food in Restaurants?

China’s food industry has long been racked with various scandals – and it scares me how easy it is for them to manufacture food without thought of how it would affect the consumers, especially kids who ingest these fake or contaminated food items!

There’s another food scandal that will surely make your stomach heave: gutter oil made from liquids taken from the sewers! It is believed to be so rampant that “one out of every ten lower market meals consumed in China” – that’s quite alarming!

Undercover government agents working on the case were able to document several individuals scooping liquid from the sewers. 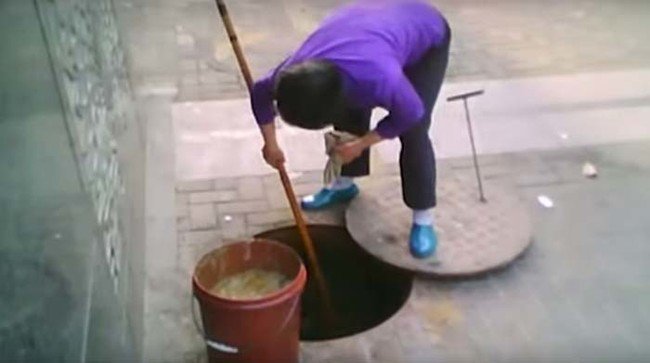 Vats filled with this liquid are sent to makeshift “refineries” where these are converted into a liquid that closely matches commercial grade cooking oil in color, scent, and texture.

Ordinary consumers might not even tell the difference between commercial grade cooking oil and refined gutter oil! This is the main reason why the use of gutter oil is rampant across the country. Of course, money also plays a huge role since gutter oil comes with a cheaper price tag ($940 per ton) than the commercial grade cooking oil ($1500 per ton). Restaurant owners who want to earn more profits would, naturally, go for the cheaper alternative – oftentimes not knowing that the product they are using is dangerous!

Consumption of gutter oil could lead to insomnia, liver discomfort, indigestion, headaches, and other symptoms – but those are just the immediate effects.

Tests of some gutter oil samples reveal alarming levels of cancer-causing polycyclic aromatic hydrocarbons (PAH) and other highly carcinogenic compounds such as aflatoxins. This means that consumption of gutter oil, especially on a long-term basis, can lead to cancer!

With some gutter oil samples also found with traces of deadly chemicals such as arsenic, this crude product might even cause death in rare circumstances!