Dubbed on the internet as the ‘least romantic groom in the world’, one man spent the entire wedding ceremony ignoring his bride as she played with his cellphone, gaining mixed reactions from netizens.

Dressed in red and wearing a garland of flowers as part of their tradition, the groom looked the part when he arrived at the wedding. But he did not even look excited to be with his bride as he spent most of the time on his phone.

Curious netizens could not help but wonder what was so exciting about the game on his phone that he would ignore his bride to spend time on what he was doing – the answer is that the game is PlayerUnknown’s Battleground, a popular multi-player online game similar to Fortnite.

In this game, players are parachuted to an island where they need to scavenge for weapons and other equipment they need to survive and ideally eliminate all the other players to win the battle. The game does not end in just one go, with most players spending several days, even weeks playing the game! 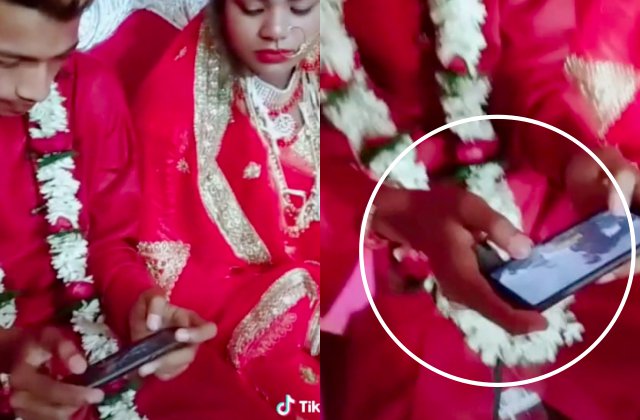 The digital struggle for survival must be so exciting for these players that most don’t mind spending many hours on their cellphones or computers, playing the game – and as this groom showed, some don’t even stop playing even on special occasions and events.

The poor bride could not do anything about her groom’s behavior during their wedding held at Siliguri City, India. She probably had no choice in who to marry, considering that India still implements arranged marriages.

The young woman did not seem impressed as she peered into her would-be husband’s phone, but the guy didn’t even appear to care. According to some reports, a guest even went to hand him a gift but he pushed the gift away as he concentrated on his game!

Netizens were divided over the matter. Some were laughing as they called this guy the ‘ultimate gamer’ but others said the woman should not have proceeded with the marriage because her would-be husband was not even interested in the ceremony.