The internet is abuzz over a group of friends who chipped in money so one of their ‘barkada’ could enroll for their last semester in college.

Jan Ray Parayno, 21, is a graduating student taking up Electrical Technology at the Marikina Polytechnic College. His father works as a foreman in Saudi Arabia while his mother is a seamstress; although the two separated in 2005, they continue to support Jan Ray’s education.

Jan Ray is set to graduate at the end of this semester but his father met an accident and could not send money for his tuition fees. Meanwhile, his mother tried to borrow money from a relative but could only get the amount by the end of October. 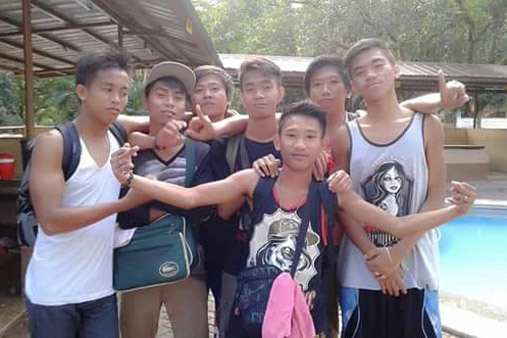 According to Jan Ray, he would have been able to pay for the tuition fees if his father did not meet an accident. But even then, he still could have made it if the school did not change its policy of asking for payment before handing out their schedules. Not sure what to do next, he told his friends about his financial problem, saying he did not have any money to pay for the fees.

To his surprise, one of his friends, Aldrin Hernandez, suggested to the others to chip in their extra cash so they could pay for the P1,665 Jan Ray needed for enrollment. Even if they also came from poor families, the rest of the gang was able to come up with the amount and Jan Ray was able to enroll! Instead of paying for their full fees, some of the boys opted to pay the downpayment instead, just so they could help Jan Ray. 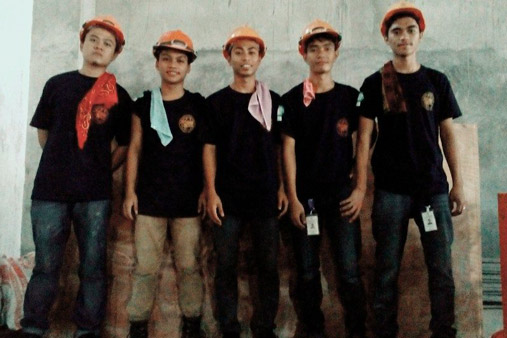 Overcome with gratitude over his friends’ actions, Jan Ray posted about it on Facebook. The post was picked by FB page Kupal Lord where it quickly went viral.

The graduating student told ABS-CBN News that he was speechless over his friends’ impulsive actions, saying he did not think they would sacrifice their own money so he could continue with his studies. According to the report, Jan Ray’s remaining balance for the semester amounts to P900. 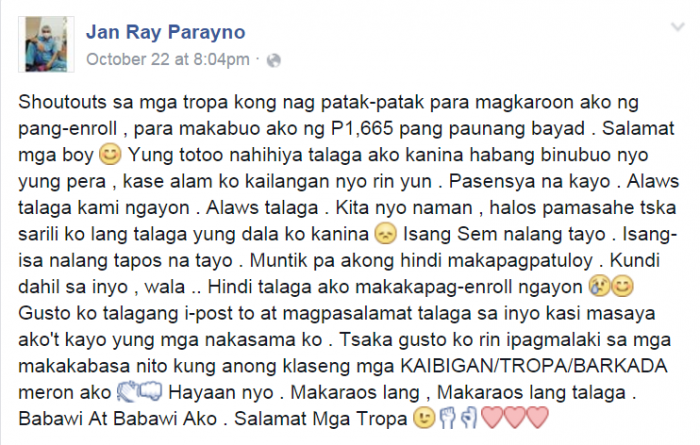 What a wonderful group of friends! They truly embody the adage, “A friend in need is a friend indeed!”