Good news! Over 4 million calamity-stricken members of the Social Security System (SSS) in the Philippines are entitled to avail of the loan restructuring program for calamity and salary loans as well as a number of short-term loans.

Members who avail of the loan restructuring program still need to pay the principal loan amount and its interest but the penalty will be lifted.

Those who pay the loan in full will automatically have the penalty waived while the penalty will only be deducted after the end of the term.

Members can avail of this program if they come from the areas affected by the following typhoons and calamities:

SSS Assistant Vice President for Member Loans Department Boobie Angela A. Ocay said, “The LRP is in response to the widespread clamor from individuals and organizations to alleviate the burden of calamity-stricken workers, who face difficulties in paying their SSS loans after suffering from natural and man-made disasters that have devastated our country in recent year.”

Loans Eligible for the Program

Loan restructuring is important because without it, delinquent members would need to pay a higher amount because of the penalties.

Take for example this loan computation obtained by RachFeed wherein the member borrowed Php24,000 in 2012. Without paying a single monthly amortization, to date, the interest rate only amounts to Php5,200 but the penalty is Php8,219.70! 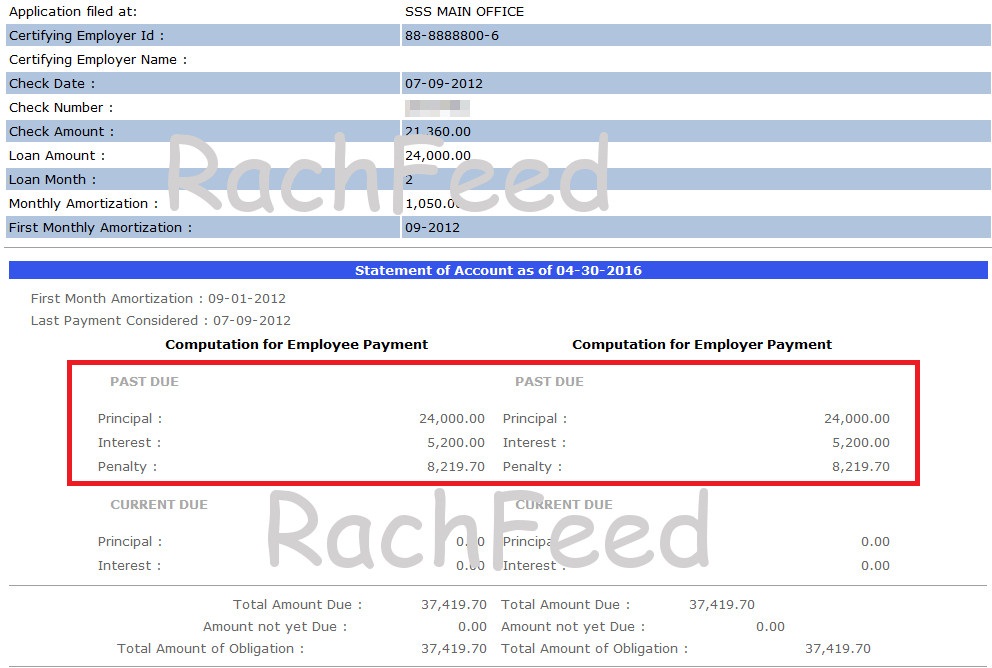 If the member applies for loan restructuring and pays the principal and interest in full, then he will only pay Php29,200 instead of the current total of Php37,419.70.

Aside from the immediate benefit of having a few thousands slashed off from the payable amount, members can also look forward to receiving other benefits only available to those members in good standing.

Moreover, with the condonation program offered for penalties, upcoming retirees will enjoy better benefits because their loans will not greatly burden the lump sum they are supposed to receive from the SSS.

Learn more about this program from this report: