Social media is abuzz over the photo of a newborn baby goat whose face resembles that of a human being. Instead of having a snout, this goat’s face was somewhat flat, giving the illusion that it was a human baby; though its ears were large and its face was covered in fur.

Of all its human-like features, the eyes, nose, and lips were the ones that looked most similar to people.

But even its body appeared to be similar to that of a human child! It has arms and legs positioned similarly to that of human beings, instead of the usual appearance of goats. 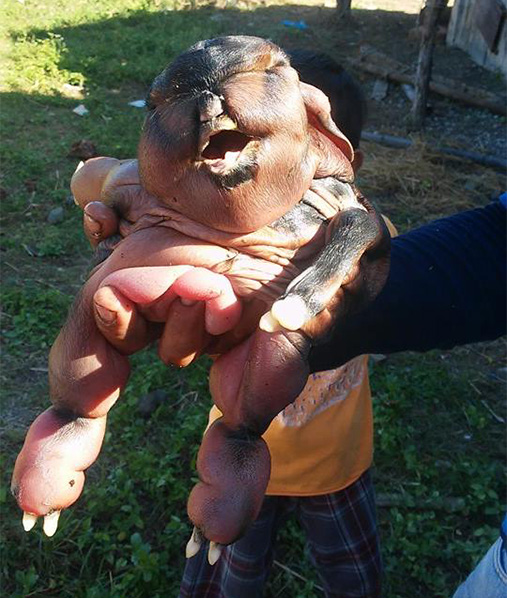 I bet scores of people would have trekked to Barangay Saud in Badoc, Ilocos Norte in the Philippines just to see this odd creature if it did not die. According to Dennis Cariaga, this weird creature only lived for some 30 minutes despite him hoping that it would survive so he could raise it as a pet. He said that had the goat lived, it would have been his first strange-looking pet.

It could have also brought him a lot of money since people are known to pay just so they could see odd creatures like this baby goat. Too bad it died so soon.

As weird as it might be, this is not the first time that a creature that bears resemblance to a human or an animal was discovered.

In 2009, a goat with a human-like face was born in Lower Gweru, Zimbabwe. It had a goat’s body but its head was said to have looked like a real human being!

But it is not just goats that were reported to have human features – there were also other animals that were born with human-like features.

In contrast, there was a report of a woman (human) who gave birth to a baby whose legs were similar to that of a goat. The child was born in Nigeria in 2012; it had no neck and looked mostly like a human child, except for its legs.