Photos being photobombed by ghosts? Sounds nothing new to me.

Just recently, we shared the story of a little girl who was photobombed by what seems like a dismembered Samurai ghost while on vacation  in Japan. A few months back, a photo of a family swimming in a creek went viral because the ghost of a girl who drowned in the same spot 100 years ago allegedly joined them for the snap.

This happy couple’s story is no different from them.

Married lovebirds Kevin and Christina Denis from Virgina, USA had no idea that an “uninvited guest” joined them in their wedding picture. 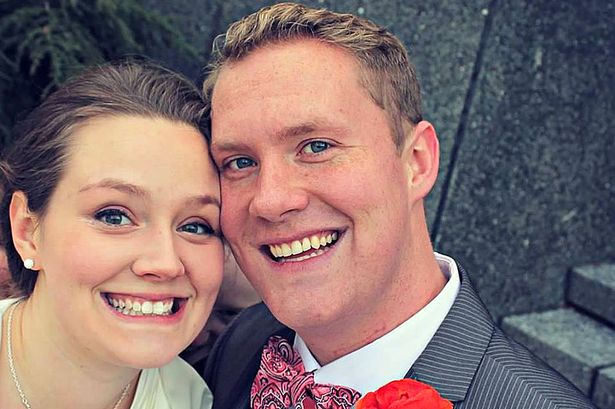 It was not until they uploaded their wedding pictures on Facebook that the happy couple noticed an unexpected photobomber in one of their photos. One of Christina’s friends pointed out the creepy-looking face behind them.

In the photo, the happy bride and groom can be seen smiling for the snap. However, a closer look at the picture shows an unidentified entity smirking behind them.

“Her sister said it might be her but that face looks absolutely nothing even close to it. That face looks like a baby face imo [in my opinion],” Kevin said.

Creeped out by what he saw, Kevin shared the spine-tingling photo on Reddit.

In the caption, he wrote: “Me and my wife’s favourite wedding photo… Until we saw what was between us… We still don’t know who it was.”

Since 2009, the word photobombing has been widely used worldwide. In fact, Collins English Dictionary hailed “photobomb” as the word of the year in 2014.

Photobombing refers to the act of purposely or accidentally putting oneself into the view of a picture. Most of the time, people do it as a practical joke to the subjects of the photo.