MANILA, Philippines- Are you hoping to score some tickets to Coldplay’s much awaited concert in Manila next year? With ticket prices ranging from P1800 to P22,500, fans are desperately saving money to get access to the band’s Manila leg tour.

While many resorted to cutting off their budget for Starbucks coffee dates, buffet dinner and summer trips to be able to afford the expensive tickets, a certain fan thought of a clever way to score a ticket. 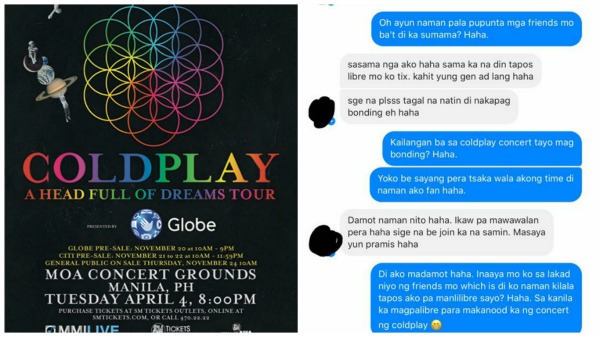 In a viral post by netizen Jhocel Angeles Beckham, she revealed how her “friend” attempted to reconnect with her in order to get a free concert ticket.

Beckham’s friend, whom she refused to identify, suddenly contacted her through Facebook Messenger recently. This move surprised Beckham as her pal has been ignoring her for quite some time. After exchanging messages, Beckham finally figured out why her friend was trying to reconnect with her.

Apparently, Beckham’s friend was inviting her to watch the Coldplay concert with her and her friends. The freeloading pal even had the guts to ask Beckham to pay for her ticket.

Seeing her friend’s real motive, Beckham declined to join her pal and said she wasn’t interested in watching the concert, which she found quite expensive.

Not surprisingly, their conversation didn’t end well as the  freeloading pal even accused Beckham of being selfish.

Formed in 1996 by musicians Chris Martin and Jonny Buckland at the University College London, Coldplay is a British rockband that rose to fame with the release of their single “Yellow” in 2000. Throughout their career, Coldplay has taken home 62 awards from 209 nominations.