A young girl’s life was tragically cut short after a knife-wielding man decapitated her in front of her mom on Monday, March 28 outside a metro station in Taiwan’s capital, Taipei.

Local newspaper Taipei Times reported that the mother and daughter were on their way to the metro station to meet their loved ones when a man surnamed Wang suddenly snatched the girl from her bike and beheaded her. It appears that the girl was cycling about a meter away from her mother when the horrifying attack occurred. 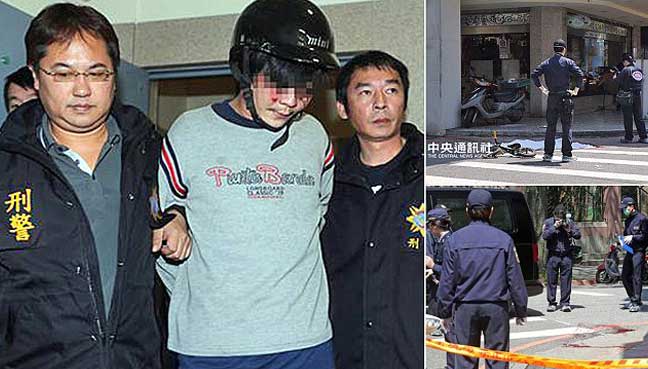 Initially, the mother thought that the 33-year-old attacker was going to help her daughter lift the bicycle onto a pavement after it got stuck.  After realizing that Wang was already hacking her daughter, the mother attempted to grab him but was unfortunately overpowered by the man.

“The first thing I could do was grab hold of the man, but I couldn’t separate him from her,” the mother explained.

Pedestrians heard the mother’s screams for help and rushed to subdue Wang before the police arrived at scene. Currently, Wang is detained at a police station and has not entered a plea. He allegedly told the police that he didn’t know the victim.

Based on police reports, Wang had been convicted for past drug offenses and had undergone treatment at a psychiatric hospital in 2014. His neighbors claimed that he acted very strange and would “shout and scream” at his home.

Killing at least four people and injuring 22 others, the 21-year-old environmental engineering student Tunghai University in Taichung brought two fruit knives he purchased from a supermarket and used it as his weapon.

In an interview with CNN, Tunghai University Vice President Tsai Jen-Teng revealed that Cheng’s past social media posts indicated that he could be mentally unstable.

“We got a tip from his former high school classmates around the end of April, and that tip said the alleged killer posted something on his Facebook page saying ‘I’m going to do something big,’” Jen-Teng said.