With your hands and feet tied up, do you think you’ll survive it if you get thrown into the sea? Most of us may answer “no” to that question but if you ask Clint Emerson, he’ll tell you its actually possible.

Being a former Navy Seal, Emerson is equipped with the training necessary to survive difficult situations such as that.Fortunately, he took the time to write a book so he can share his knowledge with everyone, Unilad tells us.

As the title implies, 100 Deadly Skills: The SEAL Operative’s Guide, is a pretty useful book where Emerson wrote about things he learned during his time inthe United States Navy.

In the book, Emerson tells us:

“When an operative is captured in hostile territory, the odds of survival are low.

“Instead of being taken to trial, he will likely simply be made to “disappear” — which is why operatives practice escaping while wearing undefeatable restraints on hands and feet, both in water and on land.

“Tied up, thrown into open waters, and left to drown to death, the well-trained operative still has recourse to a few skills that can help extend his life until he is found or reaches solid ground.” 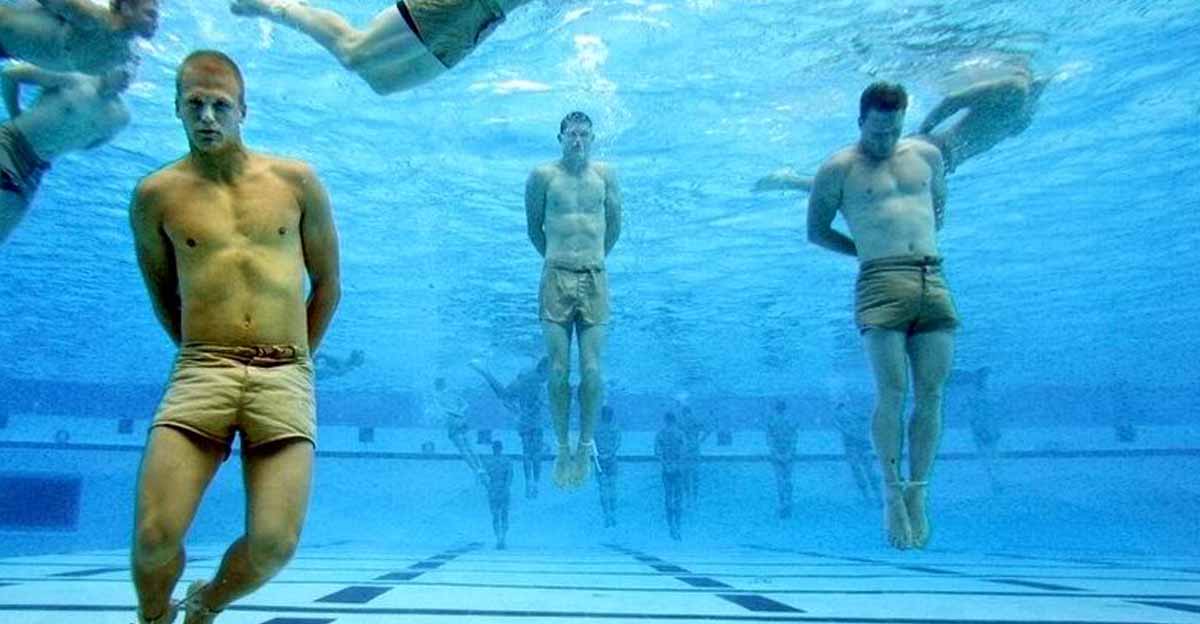 “When it comes to self-preservation in water, the key to survival is breath control. With the lungs full of air, the human body is buoyant — so deep breaths and quick exhales are key.

“Buoyancy in freshwater is more challenging but still achievable. Panicking, which can lead to hyperventilation, is the number-one enemy to survival.

“Restraints and body positioning may make breathing a challenge, but repositioning is always within the Nomad’s grasp. In shallow waters, use a sinking and bouncing approach (see diagram below) to travel toward shore, ricocheting off the seabed or lake floor up to the surface for an inhale.

“When facing down, whether floating in place or using a backward kicking motion to swim to shore, the operative should arch his back in order to raise his head above water.”

Check out this illustration below and see different ways how you can survive drowning: 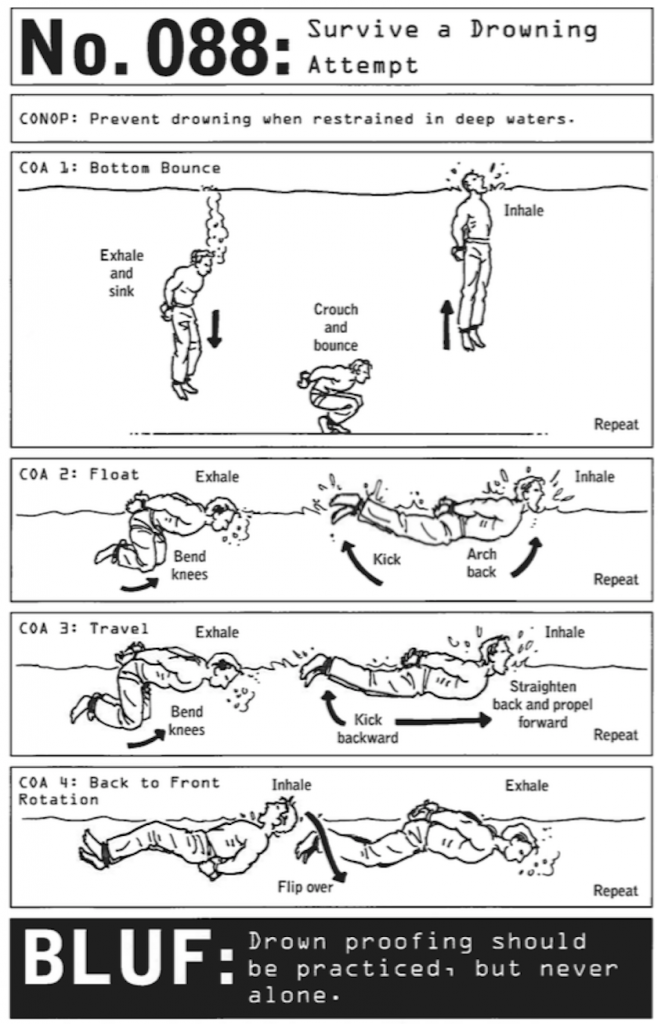 Emerson added that surviving rough waters can be even more challenging. He mentioned:

“In rough seas, this may not give him enough clearance to get his head out of water. Instead, a full body rotation will allow him to take a deep breath and then continue travelling forward.”

Thank you, Clint Emerson, for sharing these essential survival hacks.

What Is a Navy Seal?

“Today’s SEAL (Sea, Air, Land) teams,” according to Military.com,”trace their history to the first group of volunteers selected from the Naval Construction Battalions (SeaBees) in the spring of 1943. These volunteers were organized into special teams called Navy Combat Demolition Units (NCDUs). The units were tasked with reconnoitering and clearing beach obstacles for troops going ashore during amphibious landings, and evolved into Combat Swimmer Reconnaissance Units.” 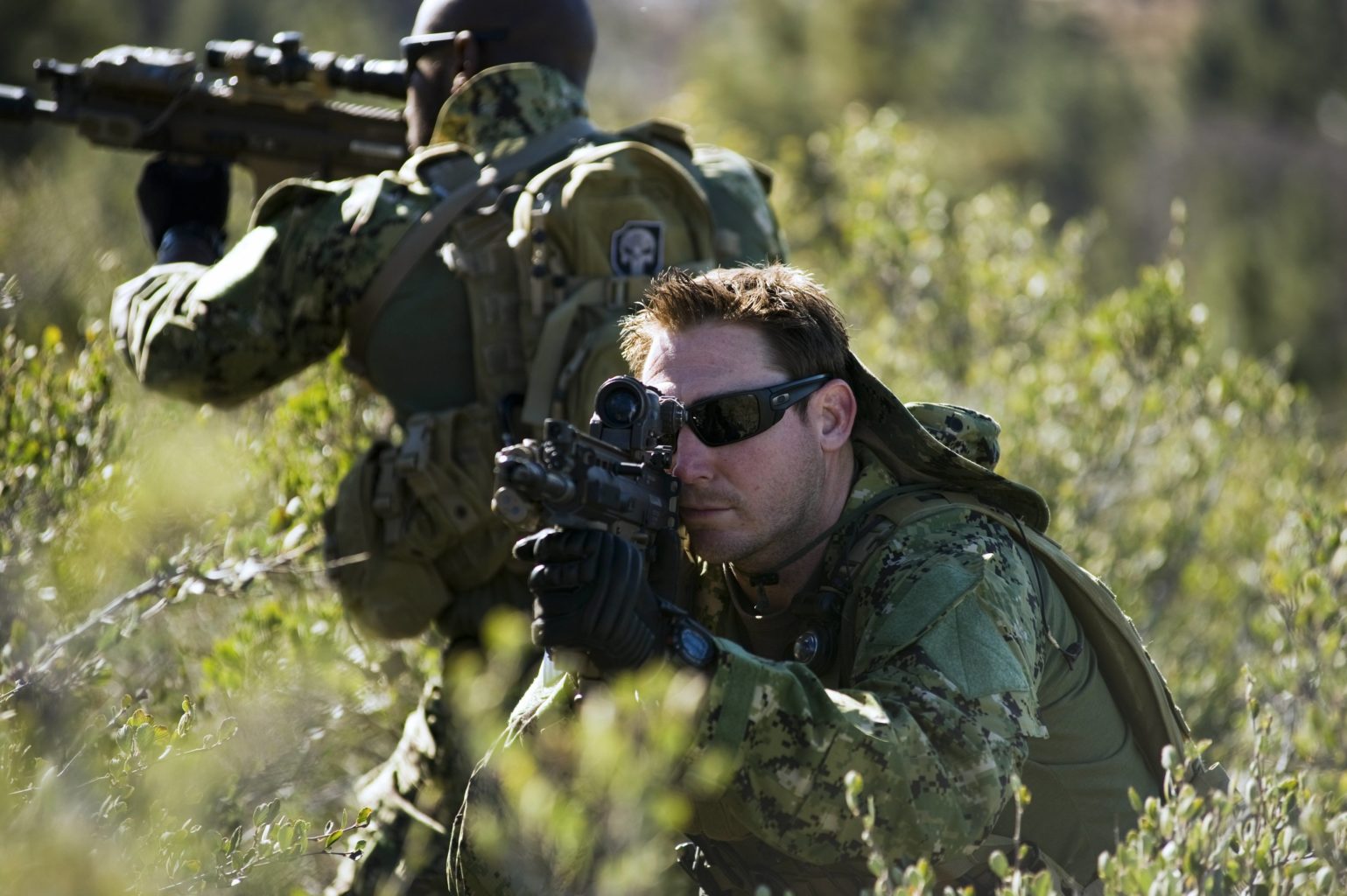 The site likewise tells us:

“SEALs (Sea, Air, Land) teams go through what is considered by some to be the toughest military training in the world… Students encounter obstacles that develop and test their stamina, leadership and ability to work as a team.

“SEAL training is extremely demanding and it is not designed to “get you in shape.” You must be in excellent physical condition and pass the PST (physical screening test) before you can be considered a SEAL candidate.”