Teresita and Josie Alvarez, also called as “the Two Marias”, made headlines around the world in August 6, 2002 after going through a successful operation. They were born craniopagus twins, twins which are joined at the head.

Just recently, after defeating all the odds at the age of fourteen, Teresita and Josie went back to California to visit Dr. Yamamoto and the medical staff who saved their lives. They wanted to thank them personally and give back by brightening and cheering up the young patients at the hospital. 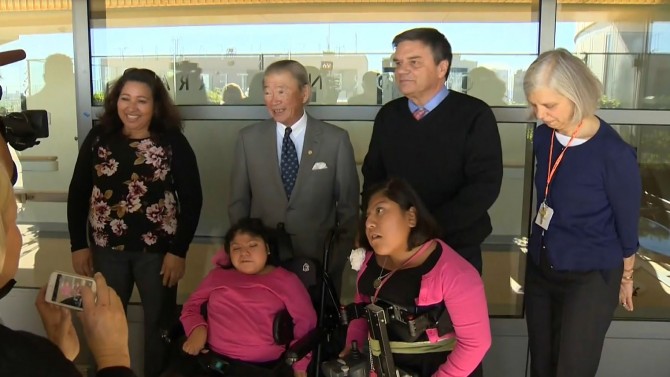 Teresita and Josie Alvarez visit Dr. Yamamoto and the medical staff that help separate them.
Photo Credit: Inside Edition

The two Marias’ story is really one for the books. Dr. Yamamoto headed the medical team at Mattel Children’s Hospital that was responsible for the successful surgery. It lasted 23 hours to separate the craniopagus twins.

Although the operation was a success, Teresita and Josie had a difficult start after the surgery. The twins went back to Guatemala and Teresita suffered from meningitis which attacked her brain. Their parents couldn’t manage their medical needs so they were sent back to the US to reside with separate adoptive parents. However, the situation could have been more devastating had they stayed conjoined.

Currently, Teresita and Josie still regularly visit the hospital and go through strict occupational and physical therapy. Their story continues as one of the most phenomenal success stories of conjoined twins fused at the top of their heads.

Watch the twins’ reunion with the Dr. Yamamoto and the medical staff here:

The Origin of Siamese Twins

Conjoined twins are also called Siamese twins. The term “Siamese” was coined from the famous conjoined twins, Eng and Chang Bunker, from Siam (a country now known as Thailand). They were joined at the lower chest by a narrow band of flesh which connected their livers.

Although they were not the earliest documented case of conjoined twins, they remain to be one of the most popular conjoined twins who eventually became successful, rich businessmen. They married two sisters in a double wedding and had a total of 21 children. The original Siamese twins died at the age of 63.