Just days after a Filipina complained about security officers at the Ninoy Aquino International Airport (NAIA) allegedly “finding” two mysterious bullets in her luggage, a foreigner has become the latest victim of what the police now dub as the “Laglag Bala” gang at the airport.

While the security officers let go of Rhed Austria de Guzman for just P500 (plus P200 for the porter who “helped” her), the ones who caught 20-year-old Lane Michael White did not release him as he refused to pay the P30,000 they were trying to ask so he could go.

According to the ABS-CBN report on the incident, White claimed that the security guard pulled out a .22-caliber bullet from the pocket of his bag even if he was sure he didn’t have a bullet hidden there. The guards argued that the bullet was clearly visible on the x-ray machine.

White alleged that one of the guards told him he could settle the matter for P30,000 but when he refused, he was detained by airport police on charges of concealing a bullet in his luggage. White is a first-time tourist who belongs to a missionary group and was set to travel to Palawan with his father and stepmother. 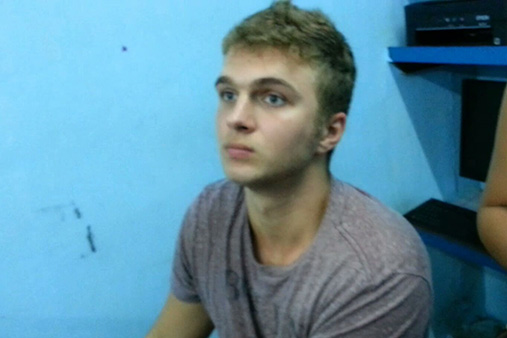 Lane Michael White insists that the bullets are not his and was willing to be detained to prove his innocence
Photo credit: Raoul Esperas/ABS-CBN News

He insists on his innocence, saying, “God endured the pain when he was being whipped at the cross and if I need to be detained just to prove my innocence so be it.”

Netizens are siding with White, saying the guy had come from an international flight through several international airports – surely, those airports would have detected the bullet if he had been carrying one, right?

According to the news report, the “Laglag Bala” gang had already been disbanded by previous airport managements but based on recent reports, it appears that the group is in operation again. Tsk. Tsk. Tsk.

White and his family are in touch with their lawyers to see what charges they can file against the culprits who planted the bullet and tried to extort P30,000 from him.

Can You Bring Live Bullets on the Plane?

Live bullets and guns are allowed on the plane – as long as they are properly declared, secured in the luggage, and checked-in. No one is allowed to bring live bullets or guns (even realistic replicas) inside their carry-on baggage for obvious reasons.

As to how much ammo you can carry, most airlines allow around 11 lbs (5 kg) but make sure to check with the airline you will be flying on for their rules.