Florida Sheriff’s Deputy recently goes viral as he shares dinner with homeless man, earning praise from netizens after he was photographed by a passerby who thought that it was sweet of the policeman to do this.

Brownie Lyons and her husband were driving around Lake City, Florida and looking for a space to park when they saw a patrol car stop close to where a homeless man was sitting. They were curious what the officer would do next as they watched him take out a chair from the vehicle.

Because the couple had to circle the parking lot to find an empty spot, they were unable to see what happened shortly after that. But when they went back, the officer was already chatting with the homeless man while the two were enjoying a meal.

“We were wondering if he was going to talk to the guy about being on the street but when we pulled out, he had set up the food and was sitting down with him eating,” Brownie said. 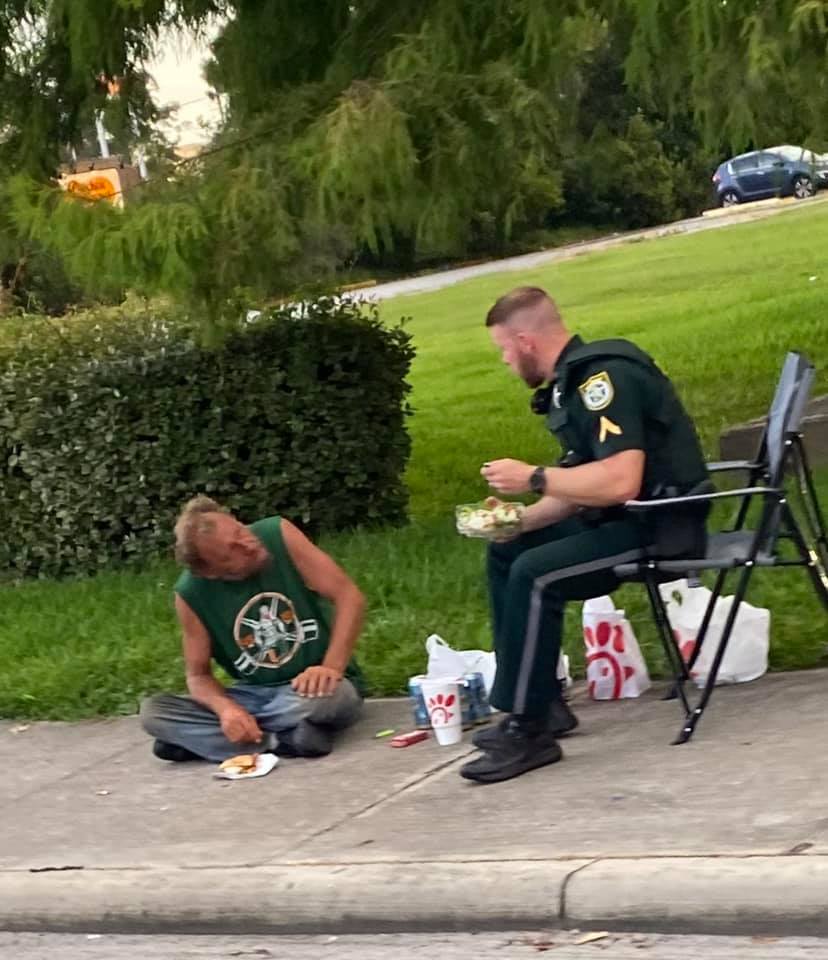 She was so happy with what she saw that she snapped a photo and shared it on her Facebook account. The post went viral, with many netizens expressing appreciation over what the deputy had done.

“I do not know the officer, and personally it doesn’t matter if he’s in law enforcement or not. I wanted to show that there are people who do good things and not always for recognition,” the woman added.

Many locals identified the officer as Corporal Shane Foote of the Columbia County Sheriff’s Office. They said that he’s a really good guy who would certainly do this willingly, without need for recognition.

“I think our community in Lake City has a lot of good officers including Florida Highway Patrol, and I have personally witnessed this but unable to capture it until that day,” Brownie proudly shared.

“So many times officers, paramedics, EMTs, and nurses like myself do a lot of good things according to our hearts to serve not for anything else. It takes very little effort to show kindness… A kind word or gesture goes a long way.”

It would later turn out that the deputy had been in the same school as Brownie’s son. The latter would remark on his mom’s post to praise his friend, “Shane all day everyday!”

A deputy is a person whose immediate superior is a senior figure within an organization; he/she is empowered to act as a substitute for this superior as the person who is next in rank.