A well-meaning old lady threw some coins into the plane’s engine for ‘good luck’ while preparing to board. Her gesture had landed her some jail time and caused the flight to be delayed for 5 hours, much to the other passengers’ frustration.

The elderly Chinese lady was not named due to security reasons but her flight from Shanghai to Guangzhou, China was considerably delayed because of her superstition.

The 150 passengers of China Southern Airlines flight CZ380 were asked to return to the terminal while mechanics took the engine apart to search for the coins.

While the flight was delayed, it was still lucky that someone had seen her throwing the coins into the engine and reported it to the crew. 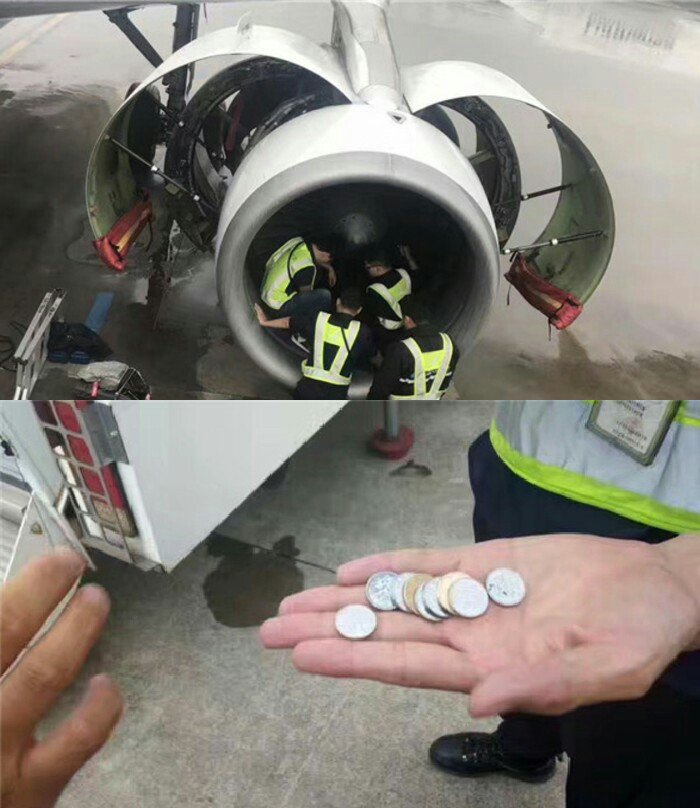 The crew who searched for the coins found all the eight she threw inside. Most actually missed the plane’s engine but one was stuck inside! Had the flight taken off as scheduled, it could have gone down due to engine trouble while they were somewhere above the skies! Whew!

The old lady was temporarily detained and questioned why she did such a thing but the poor woman honestly told the investigators that she was just trying to ward off bad luck, not knowing that what she did would cause more trouble instead.

It is too scary to think about what could have happened to all those innocent people, all because one grandma had some superstitious belief!

The plane eventually took off after a 5-hour delay.

The incident sparked debates on social media whether the old lady should be charged for the crime. There were also netizens who commented that the authorities might consider coins and other good luck charms as the possible reason for the unexplained disappearances of some flights, including MH370.

What Happened to Flight MH370?

As of press time, there are still no answers as to what really happened to Malaysia Airlines Flight 370, best known as MH370. The plane disappeared on March 8, 2014 while flying from Kuala Lumpur, Malaysia to Beijing, China.