For the past years, social media particularly Facebook and Twitter have been very helpful in solving as well as stopping crimes. By disseminating information in the public, suspects can be easily tracked and people are warned of possible modus operandi.

Facebook user YLlas MOo Galado shared the horrific experience her nephew suffered. The boy, apparently named Ely,was hit and run by a Mitsubishi Montero with plate number POG 769. It was reportedly driven by a female driver. 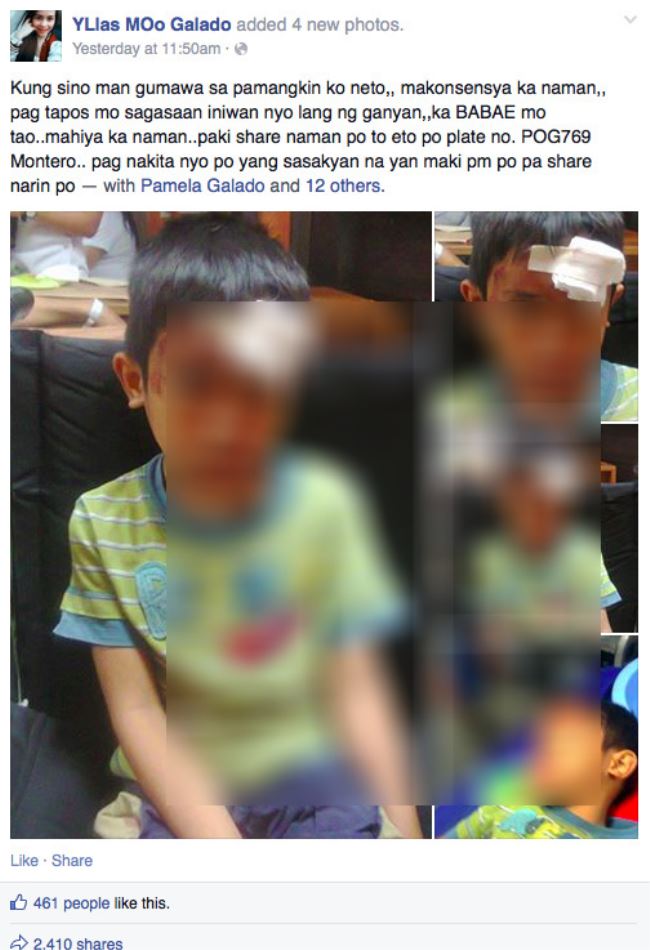 Based on the comments made on her post, the family of the victim have already reported the incident to the Land Transportation Office in Quezon City on Sunday, January 25. However, they were asked to return when the office resumes on Monday, January 26.

As of writing, the owner of the said vehicle has not yet been identified.

If you happen to know any information about the owner of the vehicle, don’t hesitate to contact any LTO office.

MMDA Killed by Hit-and-Run in EDSA

Incidents involving hit and run are very common in the Philippines. In most cases, these criminals get away with their legal responsibilities, while the victims either die or suffer financial, physical and mental distress because of the accident.

Apparently, MMDA traffic aide Sonny Acosta asked motorist identified as Mark Ian Libunao to pull over his car for driving on the wrong lane at Cubao along EDSA.

The driver reportedly raised the window of his Mitsubishi Adventure before Acosta was able to confiscate his license. In the process, Acosta’s arm got stuck and was dragged along the road as the vehicle sped off.

The suspect, who denied the accusations, is now facing facing raps of reckless imprudence leading to serious physical injury.