MANILA, Philippines- In a viral post on his Facebook page, actor-director Manny Castañeda has accused members of the Aquino administration of receiving money from illegal drugs. According to Castañeda, there is something suspicious about known allies of former President Benigno Aquino including Senator Leila de Lima and Senator Franklin Drilion questioning the list of narco-politicians earlier released by President Rodrigo Duterte.

The post, which has amassed more than 2,500 shares as of this writing, alleges that the efforts of Aquino supporters to discredit Duterte’s list is apparently driven by something more than “sheer dislike” for Duterte. 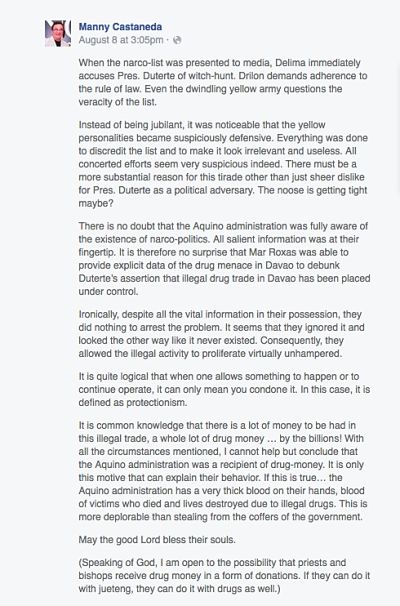 Stating that the Aquno administration was fully aware of the existence of narco-politics in the country, Castañeda said this is the exact reason why former DILG secretary Mar Roxas had knowledge on accurate data of drug menace in Davao City. Early this year, Roxas, a tough rival of Duterte in the presidential race, questioned Duterte’s credibility to solve the country’s drug problem in three to six months saying that illegal drugs is rampant in Davao City.

“It is common knowledge that there is a lot of money to be had in this illegal trade, a whole lot of drug money … by the billions! With all the circumstances mentioned, I cannot help but conclude that the Aquino administration was a recipient of drug-money. It is only this motive that can explain their behavior. If this is true… the Aquino administration has a very thick blood on their hands, blood of victims who died and lives destroyed due to illegal drugs. This is more deplorable than stealing from the coffers of the government,” Castañeda said.