Known for playing supporting gay roles in various Filipino films, Castaneda revealed that he agrees with Lily Monterverde, the matriarch of Regal Films, when she said that Christmas season is not the appropriate time to show “avant-garde, social relevant and art films”. 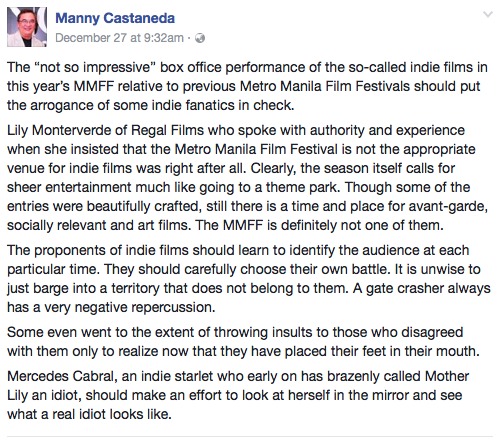 “Though some of the entries were beautifully crafted, still there is a time and place for avant-garde, socially relevant and art films. The MMFF is definitely not one of them,” Castaneda wrote.

The comedian-director also said that independent film advocates should learn to recognize audience at each particular time and should carefully choose their own battle.

“It is unwise to just barge into a territory that does not belong them. A gate crasher always has a very negative repercussion.”

Lastly, Castaneda urged Mercedes Cabral, whom he addressed as an independent film starlet, to “make an effort to look at herself in the mirror and see what a real idiot looks like”. Early this month, the veteran indie film actress apologized to Monteverde for calling her an idiot in her Facebook post.

Netizens expressed their disappointment over Castaneda’s statement through comments on his Facebook post, which has since been deleted.

A certain Drew Sarmiento wrote: ”Look, I watched Super Parental Guardians and actually enjoyed it. Honestly, I had a good laugh and it deserves the Millions of Pesos it has earned HOWEVER the film itself does not qualify to be part of a LEGIT FILM FEST.”

In his Facebook post on August, director-comedian Manny Castaneda alleged several members of the Aquino administration of receiving money from the illegal drug trade.

According to Castaneda, members of the Aquino administration have ignored the drug menace in the country despite all the vital information they possess about narco-politicians.

“With all the circumstances mentioned, I cannot help but conclude that the Aquino administration was a recipient of drug money,” Castaneda wrote.