Saddened that many Filipino photographers seem to ‘amplify’ poverty in the Philippines by highlighting these photos in snapshots of the country, veteran Filipino lensman George Tapan embarked on a mission to show the country’s natural beauty, instead.

One day, while visiting Onuk Island in Balabac, Palawan, Tapan and his team were stranded because a rainstorm is dumping buckets of water at sea.

While watching the rain from the beach, Tapan took snapshots of the beautiful scene involving not just the beach and the rain but also the stunning double rainbow in the background and the two people who didn’t seem to care that the rain was upon them.

One of the subjects was calmly rowing a small boat (locally known as ‘banca’) while the other, a woman in pink, was walking towards the beach with her hair blown by the wind.

Tapan would send the photo as entry to the ‘Places’ category of a National Geographic photo contest. The entry was chosen as winner among around 20,000 entries coming from 130 countries. 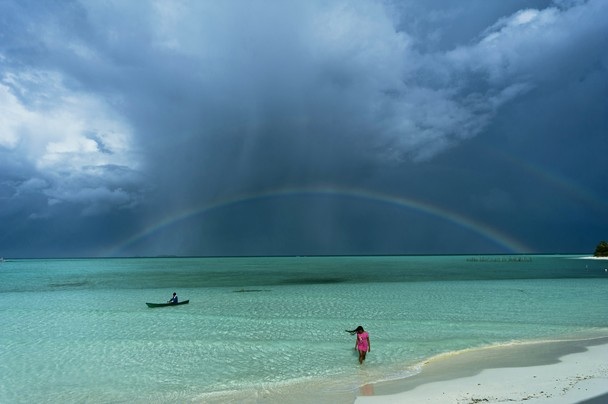 Tim Laman (wildlife photojournalist and field biologist), Peter Essick (known as “one of the 40 most influential nature photographers in the world”), and Amy Toensing (a photographer for the National Geographic) were among the panel of photographic experts who judged all the entries and picked the winners.

Just like many of those who share photos of the stunning tourist spots in the Philippines, Tapan was able to capture the beauty of the country but while promoting tourism in some way, he also encourages the locals to preserve the natural beauty of the place – and not be swept away by the “wave of tourism” that has taken over many of the islands in the archipelago.

He also encourages visitors to “take care of the place”, not destroy it during their future trips to the island.