Nathalie Hart, a former talent of GMA 7, made headlines this week after posting a controversial Instagram post.

Formerly known as Princess Snell, Hart shared a “lesson” from her father on the photo-sharing site Instagram. The photo showed a woman sitting on top of a stack of luggage and has a text that reads:

“If rape is inevitable, lay back and enjoy it.”

Annoyed by the Filipino-British actress’ remark, DJ Mo Twister decided to take a screenshot of the image Hart posted and shared it with his Instagram followers. He indicated in the caption:

“Okay doll, looks like I have to unfollow you now.@imnathaliehart.” 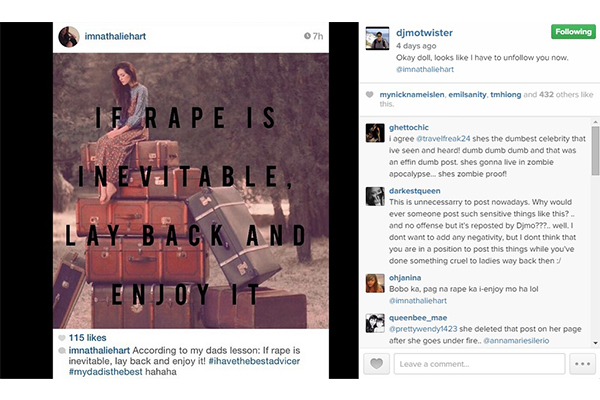 Although Hart has already deleted the disputable post, it still became a hot topic on social media as its screenshot has already spread like wildfire.

After receiving negative comments from netizens including United Voices Against Rape (UVAR), an anti-rape organisation, the former Starstruck contestant apologised and clarified her statement.

In a comment she made in a link of an article by ABS-CBN News’ Facebook page, she wrote:

“Hey Guys I just wanna inform you, I truly am regretful and displeased with what I posted. I understand why I have received hate but I want you to know I am very much against with any form of violence, abuse and rape. The whole post was blown out of proportion. It was taken literally and out of context, I now realise that this is no joking matter. Hoping you guys can understand that this was a huge mistake and I posted it without thinking it through.”

“Again It was all a bad joke and it accumulated even more when Dj mo-twister posted it. I tried to contact him to fix this privately but I guess he’s enjoying all the attention. I’m deeply sorry if I offended or hurt anyone,” she added.

Rape in the Philippines

Rape is regarded as one of the most common forms violence against women in the country. A report showing reported rape cases for the past 15 years revealed an average of 3,889 documented rape incidents annually.

The report prepared by the PNP Women and Children Protection Center also showed that 75.5% of rape victims in the Philippines are children. Majority of these children belong to the age group 14 to 18.

Despite the increasing trend in reported rape cases in the past years, experts also believe that the figures may also mean that more and more victims are becoming brave enough to open up about their ordeal.