Chowking and other local fastfood chains are fond of giving out coupons for customers to enjoy special rates on food bundles they buy from the restaurant. One customer who tried to claim one of these coupons, however, felt that the store was trying to scam him. Instead of speaking with the manager or calmly dealing with the cashier, however, this guy went on a ‘bitch mode’ and threw the coupon at the cashier!

The customer, A. Mallari [full name withheld for privacy], posted on his Facebook account how he went to Chowking Madrigal Alabang to avail of the coupon for lunch. The coupon was for 1 piece chicken with a small halo halo and regular drinks, totaling Php137.

When the cashier took his order, he was told that the store had run out of soda, so he must choose between iced tea and pineapple. He chose iced tea. Mallari was shocked, however, when the cashier told him he had to pay Php142 instead of the Php137 indicated in the coupon, especially because the purpose why he used the coupon was that he was trying to save money. 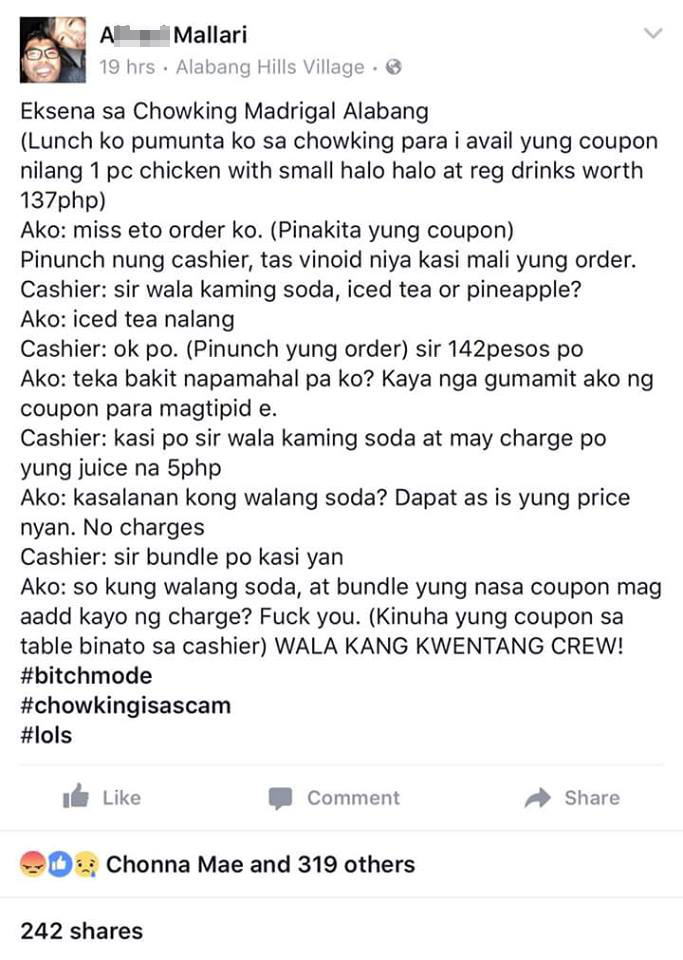 But while the cashier patiently explained that the store did not have soda and they actually charge Php5 for an ‘upgrade’ to iced tea, Mallari was angered as he felt that he does not have to pay for the price difference since it really wasn’t his fault.

When told that he really had to pay the Php5 difference since the coupon was for the bundle with soda, Mallari got angry and threw the coupon at the cashier’s face! He also told her that she was a ‘worthless crew’ before storming away.

As he proudly posted the incident on his Facebook page claiming that ‘Chowking is scam’ in a hashtag, he received backlash instead of sympathy from other social media users mostly because he ‘threw a tantrum’ over Php5 and that he had gone out of the line when he threw that coupon on the cashier’s face!

A scam is a fraud or dishonest scheme often meant for financial gains out of the unsuspecting victim.