A boy’s Christmas letter put inside a blue helium ballon has reached a family in Georgia after it drifted into their backyard.

Suzanne Womac Edwards posted a photo of the heartwarming note on Facebook which quickly went viral and touched the hearts of netizens. The note was written by a young boy for his deceased father. 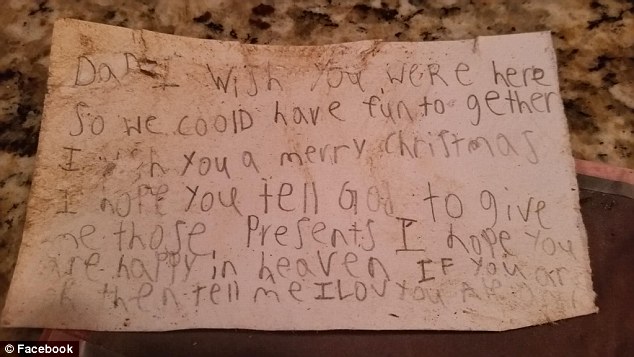 The note reads:“Dad, I wish you were here so we could have fun together. I wish you a Merry Christmas.”

“I hope you tell God to give me those presents. I hope you are happy in heaven. If you are, OK then tell me. I love you, Alejandro.”

Edwards sought the help of social media to help her locate the boy. Well-wishers across the country shared her post hundreds of times and luckily, it reached Alejandro’s mother, Yudy Katerine.

According to Katerine, how the balloon ended up in Edwards’ garden was one of “life’s miracles” as their home was 20 miles away.

Katerine revealed that Alejandro sends a different message in a balloon to his father twice a year- on his birthday and death anniversary.

The 7-year-old boy was just four when his law professor father was killed in front of him in a street in Colombia for his watch and wedding ring. However, Katerine believes her deceased husband was murdered because of his prominent position in the town and pro-law enforcement stance.
Katherine and her new husband Brian Swift had tried to contact Edwards but the latter is yet to respond.

What is the environmental impact of balloons?

According to balloonsblow.org, balloons can kill marine and wild animals particularly turtles, whales, dolphins and other birds when it is ingested. It blocks the animal’s digestive track leaving them unable to take in any more nutrients. Moreover, the animal can become immobile or unable to eat when they become entangled in the balloon.