She might have lost her family what would have been the easiest $10,000 from “Family Feud Canada” but the contestant who went viral for her wrong answer stands to receive $10,000 worth of food from Popeyes, the fast food chain she thought about when she shouted “Chhhiiicckkkeennnn”!

Contestant Eve Dubois went viral for getting the wrong answer to a very simple question on “Family Feud Canada”, thinking that host Gerry Dee was referring to the fast food chain Popeyes in the game.

“Real simple. There’s one question. Only one answer. Whoever gets it, you’re playing for $10,000. That’s it. Whoever guesses this wins the game,” told Eve and another contestant during the pilot episode of the popular game show’s Canadian version. “Name Popeye’s favorite food.”

“Chhhiiicckkkeennnn!” shouted Eve as she does a little victory dance, much to her family’s dismay. Everyone except Eve knew that Gerry was referring to Popeye the Sailor, not the fast food chain. It cost them the $10,000 from the game show, but Popeyes (the fast food chain, this time) took this opportunity to help Eve save face by giving her $10,000 worth of food she and her family can enjoy the entire year.

“Our survey says you got that right. DM us to claim your $10,000 worth of Popeyes. #LoveThatChickenFromPopeyes,” the fast food chain tweeted. 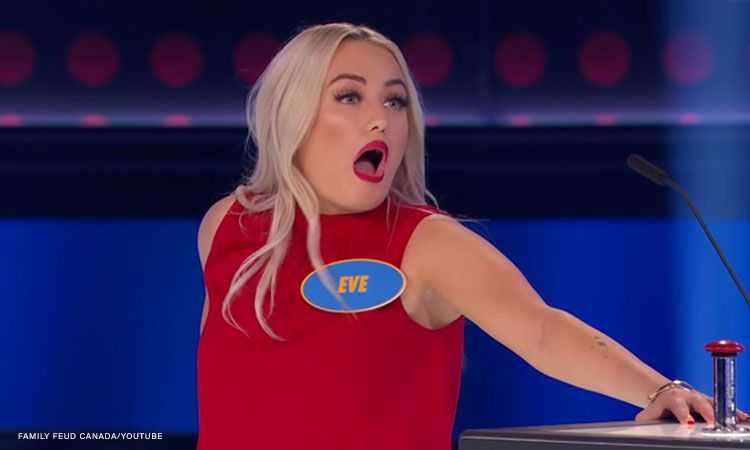 Of course, it’s not entire a loss for the fast food chain, either. Although they were not part of the contest and are not sponsors of the game show, they did get lots of publicity from Eve’s big mistake. It’s certainly a win-win situation for everyone.

Haven’t seen her big moment yet? Watch it here:

A game show is a game that is made specifically for a TV program. In this format, people compete for prizes either as individual players or as pre-determined teams.